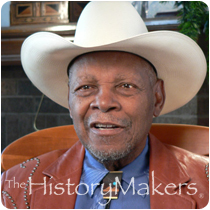 See how Paul Stewart is related to other HistoryMakers
Donate Now

Curator Paul Wilbur Stewart was born on December 18, 1925 in Clinton, Iowa to Eugene Joseph Stewart and Martha L. Moor Stewart. His father was in the trucking business, and during the Great Depression, he owned a trucking company. Stewart’s family was one of the few Black families to live in a predominately white area at that time. After graduating from high school, Stewart joined the U.S. Navy and earned the rank of seaman first class. After he served in the Navy, he moved to Evanston, Illinois with his brother, Eugene. He took night classes at Roosevelt University while working as a mail sorter at the post office. However, he did not receive a degree from Roosevelt because he dropped out in order to assist his brother with his school expenses. Instead, he went on to get his barber’s license from Moler Barber College in 1947. After that, he spent more than a decade working as a barber in Illinois, Wisconsin and New York.

In the early 1960s, Stewart’s interest in the involvement of Blacks in the West peaked after visiting a relative in Denver. Stewart made a commitment to exposing the world to the prominence of Black cowboys in the American West. In 1971, Stewart started a collection in an old Denver saloon. His collection consisted of more than 35,000 items, including personal artifacts, photographs, clothing, paintings, letters, legal documents, newspapers, and oral histories. However, with the onset of the downtown urban renewal, he was forced to find another location. He housed the “Paul Stewart Collection” in Denver's Clayton College for almost ten years. During the time it was at the college, it had become incorporated and had a board of directors.

The museum’s prominence grew, so once again, the location needed to be adjusted. In the mid-1980s, Stewart packed up his museum and moved it to a larger, more convenient location in Denver's Five Points historical district, a predominantly Black neighborhood in downtown Denver. During the growth of his museum, in 1986, Stewart married gospel artist Johnnie Mae Davis.

In the early 1990s, the collection was moved to another location in Five Points. Today, the museum is open five days a week. More than 5,000 visitors come to the museum every year. The Black American West Museum and Heritage Center also offers educational activities and programs, tours and other special events. Over the years, Stewart also served as a member of the Historical Records Advisory Board for Colorado and has taught at Metropolitan State College in Denver.

Stewart was interviewed by The HistoryMakers on November 6, 2008.

See how Paul Stewart is related to other HistoryMakers
Donate Now
Click Here To Explore The Archive Today!