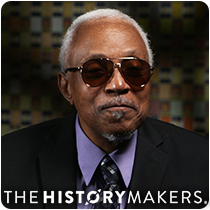 See how Paul Riser, Sr. is related to other HistoryMakers
Donate Now

After graduation, Riser began working as a session musician playing trombonist with The Funk Brothers at Motown Records. By 1963, Berry Gordy, the founder of Motown Records, chose Riser to work as a music arranger at Motown Records. He worked on a number of Motown hits during his tenure, including “ I Heard It Through the Grapevine” by Marvin Gaye, ”My Girl” by The Temptations, “My Cherie Amour” by Stevie Wonder, “Ain’t No Mountain High Enough” by Diana Ross, "If I Were Your Woman" by Gladys Knight & The Pips, "Reach Out and Touch (Somebody's Hand)” written by Ashford and Simpson as performed by Diana Ross, and “The Tears of a Clown” by Smokey Robinson & The Miracles. Following his departure from Motown Records in 1973, Paul Riser continued to arrange songs for popular artists. He has worked with artists such as Quincy Jones, The Carpenters, Carly Simon, Aretha Franklin, Patti LaBelle, and Phil Collins. In 2003, Riser arranged music for R. Kelly’s fifth studio album, Chocolate Factory. The album debuted at number one on the U.S. Billboard 200 chart and sold over three million copies worldwide.

In 1972, Riser won a Grammy Award for “Best R&B Instrumental Performance” for the song “Papa Was A Rollin’ Stone” by The Temptations. He was nominated for another Grammy Award in 1982, for “Best Instrumental Arrangement Accompanying Vocals” for the song “Do I Do”, which was performed by Stevie Wonder. In 2009, Riser was inducted into the Musicians Hall of Fame and Museum.

Riser and his wife have a son, Paul Riser, Jr.

Paul Riser, Sr. was interviewed by The HistoryMakers on October 16, 2017.

See how Paul Riser, Sr. is related to other HistoryMakers
Donate Now