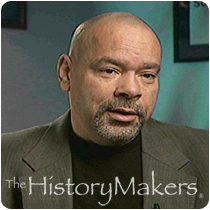 See how Paul Mason is related to other HistoryMakers
Donate Now

Paul Stanley Mason was born on September 14, 1955, in Cleveland, Ohio. Mason’s mother worked as a social worker and his father, a former Tuskegee Airman, was a dentist; his was the first black family in the Shaker Heights community where he grew up. In 1973, as senior class president, Mason graduated from Shaker Heights High School, where he played football and baseball and sang for the choir.

Mason attended Wesleyan University, earning his B.A. degree in classical civilization in 1977. During his senior year, Mason spent a semester studying abroad in Italy. Mason taught high school English at Friends Academy, where he also coached the basketball and football teams. Mason earned his masters degree from the Graduate School of Journalism at Columbia University in 1981; that same year, he received a fellowship to study the race riots in London, England. This assignment helped Mason land his first job with ABC News, working on the assignment desk and as an off-air reporter for the network.

After serving as operations producer for Good Morning America, Mason joined the Miami bureau of ABC in 1986, working as a field producer. In 1989, Mason was assigned to World News Tonight and later became the Miami-based producer for ABC News Primetime Live. In 1998, Mason joined the faculty at the University of California at Berkeley, teaching at the Graduate School of Journalism while continuing to produce segments for 20/20 and Primetime Live. Mason then went on to serve as executive producer of Monday editions of Primetime Live and executive producer of World News Tonight Saturday and Sunday. In the latter capacity, Mason was responsible for the editorial content and production of the weekend evening news broadcasts.

Mason has received numerous awards and honors, including an NAACP Image Award and several Emmy nominations.

See how Paul Mason is related to other HistoryMakers
Donate Now
Click Here To Explore The Archive Today!