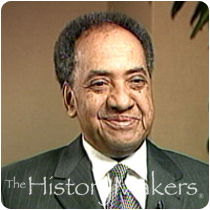 See how Paul J. King is related to other HistoryMakers
Donate Now

Working his way through college, King’s part time paint contracting work exploded into a full time business. He then faced the reality that the city rarely awarded jobs to black contractors. Keenly aware that public contracts were necessary for growth, King began to organize with other black contractors. He became executive director of the United Builders Association of Chicago in 1969 and a national officer in the National Association of Minority Contractors. In association with the Builders Association of Chicago and The University of Illinois King developed two courses in construction management for minority contractors. He spearheaded two national meetings that involved hundreds of contractors and a working alliance with Congressman Parren Mitchell. As a faculty member of Advanced Management Research-International, King lectures on affirmative action issues. He has also been a contract compliance officer for the United States Department of Labor. Today, King is the Chairman and CEO of UBM Construction with over 100 employees and contracts worth up to a billion dollars. He is also chairman and founder of the O’Hare Development Group.

Traveling to twenty-four states and over forty cities to speak about the plight of minority contractors, King’s economic and political views are published in Black Scholar, Emerge Magazine, and Black Enterprise. He is a lecturer at Roosevelt University in African Studies and contemporary black issues. King lives in Chicago with his wife, LoAnn.

See how Paul J. King is related to other HistoryMakers
Donate Now
Click Here To Explore The Archive Today!