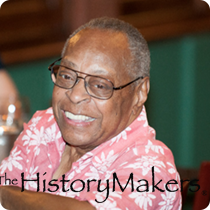 See how Paul Delaney is related to other HistoryMakers
Donate Now

Distinguished veteran print journalist and activist Paul Delaney was born in Montgomery, Alabama, on January 13, 1933. Delaney attended Ohio State University where he received his B.A. degree in journalism. Paul Delaney’s writing and leadership as a proponent of civil and humanitarian rights has led to his distinction and recognition as a journalist, humanitarian, scholar and activist.

Delaney’s career began at the Atlanta Daily World amidst the Civil Rights Movement. While at the Atlanta Daily World, Delaney covered some of the most important figures and events of the Civil Rights Movement. From Atlanta, Delaney went to work for the Dayton Daily News in Dayton, Ohio, and the Washington Star in Washington, D.C. Delaney next joined the New York Times Washington, D.C. bureau, where he covered urban affairs, politics, and civil rights. Delaney served in the Chicago Bureau of the New York Times as bureau chief in Madrid, Spain, an editor on the national news desk, and senior editor for newsroom administration. Paul Delaney spent twenty-three years with the New York Times as an editor and correspondent where he rose to national prominence as an African American journalist. Delaney became recognized for being one of the most prominent journalists of African American heritage in the world. Delaney served from 1992 to 1996 as the first African American chair of the University of Alabama’s journalism department, editor of the editorial page of Our World News from 1996 to 1998, and wrote editorials for the Baltimore Sun from 1999 to 2000.

Delaney was one of the founders of the National Association of Black Journalists and a member of the Overseas Press Club; the Society of Silurians; the Society of Professional Journalists; and the board for National Public Radio. Delaney was also on the selection committee for the Media Fellows in Health Program at the Henry J. Kaiser Family Foundation. Delaney went on to direct the Initiative on Racial Mythology of the Gene Media Forum sponsored by Syracuse University.

See how Paul Delaney is related to other HistoryMakers
Donate Now
Click Here To Explore The Archive Today!