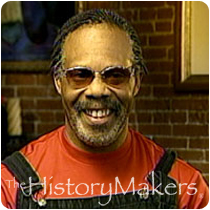 See how Paul D. Goodnight is related to other HistoryMakers
Donate Now

Artist Paul Goodnight was born in Chicago on December 31, 1946. At a young age, his mother took him to New London, Connecticut, and later to Boston, where a foster family raised him. After finishing high school, Goodnight was drafted into the Army, and served two years in Vietnam. The experience changed him and upon his return, he was unable to speak because of the horrors he witnessed there. Soon after, Goodnight began to paint, reverting to the means of expression he had employed as a child.

Finding release in his art, Goodnight regained his voice and enrolled in the Vesper George School of Art, taking English classes at a nearby community college to help him along the way. In 1976, he earned his B.A. from the Massachusetts College of Art. Goodnight continued to create, and in 1984 one of his works was displayed on an episode of The Cosby Show. Since then, his works have been featured in such programs as Seinfeld, ER and Living Single. Goodnight then began traveling the world, studying the art of the Caribbean, Africa, Russia and Asia, as well as working under contemporary masters such as Alan Crite and John Biggers.

In 1991, Goodnight founded Color Circle Art Publishing, which is dedicated to the perpetuation of the art and imagery of the African diaspora. His works adorn the homes of such notables as Maya Angelou, Wesley Snipes and Samuel L. Jackson, as well as the halls of the Smithsonian Institute. In 1996, Goodnight was commissioned to create a piece for the 1996 Olympic Games, and in 1998, he designed the World Cup poster. He was awarded the U.S. Sports Academy Artist of the Year Award in 1997. Goodnight's biggest inspiration is his daughter, Aziza.

See how Paul D. Goodnight is related to other HistoryMakers
Donate Now
Click Here To Explore The Archive Today!