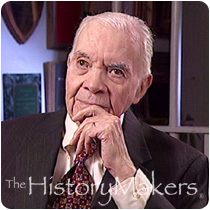 See how Paul Cooke is related to other HistoryMakers

College president Dr. Paul Phillips Cooke was born on June 29, 1917 in New York City to Mamie Kathleen Phillips and Louis Philips Cooke, Sr. Cooke attended Garrison Elementary School and Garnet-Patterson Junior High School, both in Washington, D.C. He earned a diploma from Dunbar High School where he played on the baseball team and was a member of the Cadet Corps. During his senior year in 1933, his company was asked to perform at a wreath laying ceremony at Arlington National Cemetery.

From 1933 to 1937, Cooke attended Miner Teachers College in Washington, D.C. where he earned his B.S. degree. He continued his studies at New York University where he earned his M.A. degree in education. In 1943, Cooke earned another M.A. degree in English from the Catholic University of America in Washington, D.C., and completed his studies with an Ed.D. degree from Columbia University in 1947. While attending Columbia, Cooke was drafted and served in the U.S. Army between 1945 and 1946, after which he was honorably discharged with the rank of corporal. In 1951, Cooke worked to assist Washington D.C. area African American deaf children who were being sent out of the city for their education while white deaf students from the city were being taught at Kendall School. Cooke worked as a professor at the District of Columbia Teachers College for twenty-two years until 1966 when he was appointed president of the college and served in that post until 1974. In 1978, Cooke worked as a consultant for the World Peace Through Law Center, an organization that advocates for poor and disadvantaged people.

Cooke was a member of the World Veterans Federation, the American Veteran's Committee and served as an officer for the Catholic Interracial Council of Washington, D.C. In 1983, Paul Phillips Cooke Day was declared in Washington, D.C. by former Mayor Marion Barry and in 1986, the University of the District of Columbia awarded him with an honorary degree and also gave him the U.D.C. Legacy Award in 2004. The university also established the Paul Phillips Cooke Lecture Series and the Paul Phillips Cooke Scholarship Program. Cooke was also active in his fraternity, Kappa Alpha Psi, Inc., which awarded him the Laurel Wreath in 1995.

See how Paul Cooke is related to other HistoryMakers
Click Here To Explore The Archive Today!