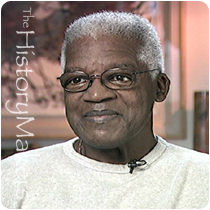 See how Paul Carter Harrison is related to other HistoryMakers

Shelving his plans for a Ph.D. in 1962, Harrison spent seven years in Spain and the Netherlands, honing his writing and experimenting in theatre. In Amsterdam he met students from Surinam with whom he dialogued about the drama of African ritual. Harrison wrote a film script, Stranger On The Square, and two plays: The Experimental Leader and Dialogue from the Opposition.
From 1968 to 1970, Harrison taught theater at Howard University, where his students included: Phylicia Rashad, Debbie Allen, Linda Goss, Petronia Bailey, Clinton T. Davis and Pearl Cleage. At the State University of California at Sacramento, 1970-72, he wrote and directed Tabernacle and directed Melvin Van Peebles’ Ain’t Supposed To Die A Natural Death. In 1973, his play, The Great McDaddy, produced by the Negro Ensemble Company, won an Obie Award. From 1972 to 1976, he taught at the University of Massachusetts at Amherst, where he is now professor emeritus and wrote movie scripts for Lord Shango (1975) and Youngblood (1978). In 1976, Harrison was hired as professor and writer in residence at the Theatre Center of Chicago’s Columbia College and served until his retirement in 2002. While in Chicago, Harrison directed ETA’s acclaimed production of Marsha Leslie’s The Trial of One Short Sighted Black Woman (1996) and Columbia’s Doxology (2002).

Harrison’s books include: The Drama of Nommo and Totem Voices: Plays From the Black World Repertory (1972), Kuntu Drama: Plays From the African Continuum (1974), In The Shadow of the Great White Way (intro 1989), Classic Plays from the Negro Ensemble Company (1995), and Black Theatre: Ritual Performance in the African Diaspora (2003). Harrison lives in New York City and looks forward to annual vacations in Spain with his daughter.

See how Paul Carter Harrison is related to other HistoryMakers
Click Here To Explore The Archive Today!