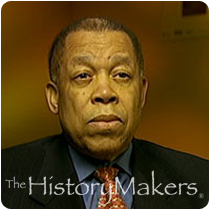 See how Paul Brock is related to other HistoryMakers
Donate Now

Brock spent eighteen years as a radio journalist before moving into television producing and reporting, starting at WBNB in St. Thomas, Virgin Islands. From there, Brock went on to become news director at WETA and later WHUR in Washington, D.C. While with WETA, he was credited with bringing the first live coverage of a congressional committee hearing ever aired. Brock was also the originator, producer and chief fundraiser of the NAACP Nightly Convention Highlights program that aired on PBS from 1978 to 1983. Later, Brock served as producer, writer, editor and national distributor of the NAACP Voter Education public service announcements. The success of this was a launching point for him to move into a position as fundraiser, assistant producer, and vice president of the company that produced American Playhouse. In 1994, Brock became media coordinator of the Village Foundation, an organization working to "repair the breach" between African American males and the rest of society.

Brock left the Village Foundation in 2002, but he remains active with the NAACP, having been with the organization since 1948. He has also served as the deputy director of communications for the Democratic National Committee, vice president for news and operations at American Urban Radio Network, and is a senior fellow for public affairs at Howard University's Institute for the Study of Educational Policy. He has also been a member of the National Association of Black Journalists since 1974. In 1975, Jet and Ebony both recognized him as Man of the Year, and in 1983, Brock received the Black Filmmakers Award for Producer of the Year. Brock has four children and a wife, Virginia.

See how Paul Brock is related to other HistoryMakers
Donate Now
Click Here To Explore The Archive Today!