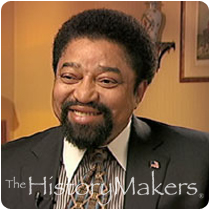 Born September 14, 1940, Paul Joseph Adams III learned the value of education from his parents, Patsy Lois and Paul Adams, Jr., who enrolled him in private elementary and high schools in his hometown of Montgomery, Alabama. After receiving a B.A. from Alabama State University, Adams moved north to Chicago, where he worked in mental health education while earning his M.A. in psychology from Northeastern Illinois University.

In 1971, Adams was hired as director of guidance for Providence-St. Mel School, a private Catholic high school in Chicago. He became the school's principal a year later. When the Archdiocese of Chicago withdrew funding for the school in 1978, Adams spearheaded a national campaign to raise money for the school. In response to his publicity-seeking efforts and the support of the Providence-St. Mel students and community, the school received local and national media attention. Donations poured in from across the country, and Adams transitioned Providence-St. Mel into a not-for-profit independent school.

At Providence-St. Mel, Adams focused on developing a strong academic standard while enforcing strict disciplinary codes. To guarantee the safety of his students, he moved into the vacant convent inside the school to ward off thieves and vandals. His dedication became legendary and during the next two decades, Adams successfully transformed Providence-St. Mel into a premier learning institution for African American students.

Since 1996, Adams has served as president of Providence-St. Mel School, managing an annual budget in excess of $6 million. He is still very active in planning the curriculum for the school, which has expanded to include elementary and middle grades. Under Adams' leadership, every one of Providence-St. Mel's graduating seniors has been accepted to institutions of higher learning.

Adams has received numerous awards for his efforts, including the McDonald's Education Achievement Award, the African-American Male Image Award, the Rozell R. Nesbitt Community Education Award, and four honorary doctorates. Adams was named an American Hero in Education by Reader's Digest and was voted Man of the Year by the Chicago Urban League.