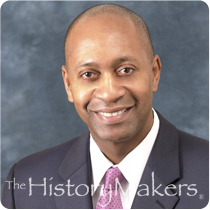 See how Patrick R. Gaston is related to other HistoryMakers

Patrick Reginald Gaston was born on August 5, 1957, in Port Au Prince, Haiti. While still a youth, Gaston and his family moved to Boston, Massachusetts, where he remained until he relocated to Montreal, Canada, as a teen to attend boarding school. From Montreal, Gaston went on to the University of Massachusetts, from which he graduated with his B.A. degree in management in 1984; that same year he began work with Verizon. In 1992, Gaston received his M.B.A. degree from Northeastern University. In addition to the degrees he was awarded within the United States, Gaston also earned an international certificate in business from Ecolé Superieure de Commerce in Reims, France.

Remaining with Verizon throughout his professional development, Gaston occupied a wide array of management positions, ranging from operations, to marketing, to human resources, to strategic planning and government relations. Eventually, Gaston rose to the position of executive director of Verizon’s Strategic Alliances Group, in which he coordinated the company’s activities within the community.

Gaston was named the president of the Verizon Foundation in 2003; here he was charged with overseeing the philanthropic activities of the company, including the issuing of grant funding to community development programs. The Verizon Foundation placed special emphasis on the utilization of technology and literacy to improve the quality of community life; to help achieve those aims, Gaston oversaw an annual budget of $75 million. In 2007, Gaston took on the additional role of independent director and member of the audit committee of Bed Bath & Beyond, Inc.

In addition to his professional activities with Verizon and Bed Bath & Beyond, Gaston is heavily involved with a variety of organizations and foundations, including the NAACP Special Contributions Fund Board of Trustees; America’s Charities; the Foundation of the University of West Indies; and the World Institute on Disability. Gaston has also served as a fellow at the Aspen Institute, and a guest lecturer on the topics of public responsibility and philanthropy at a long list of universities that included Rutgers University, and Dartmouth College.

See how Patrick R. Gaston is related to other HistoryMakers
Click Here To Explore The Archive Today!