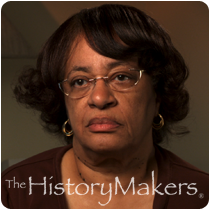 See how Patricia Turner is related to other HistoryMakers
Donate Now

Civil rights pioneer and educator Patricia Turner was born on October 11, 1944 in Norfolk, Virginia. Her father, James Turner, was a Navy Master Chief Petty Officer. Her brother, James Turner Jr., was two years younger than her and also a member of The Norfolk 17. In 1959, five years after Brown v. Board of Education, Turner and her brother entered Norview Junior High School, a previously all-white school. The siblings were two of the five students who attended Norview Junior High that year. After finishing eighth grade, Turner went to Norview High School where she graduated near the top of her class of over 400 seniors. She worked as a nurse before moving to Pennsylvania where she worked for the Thomas Jefferson Hospital. She then moved back to Virginia and worked for Dr. Robert Johnson, a pediatrician.

She continued her education and attended Norfolk State University where she earned her B.S. degree in mathematics. She also received her M.S. degree in education from Old Dominion University and took classes toward a Ph.D. degree at the College of William and Mary. After obtaining her undergraduate degree, Turner began working for Norfolk Public Schools as a math teacher, teaching curriculum to sixth and seventh graders. She taught until her retirement in 2008. However, that same year she became the Director of Oakwood Academy. In 2009, she along with the other surviving members of the Norfolk 17 returned to Norview High School to celebrate the 50th anniversary of “massive resistance.”

For her work as an educator, she received many accolades, including her Honorary Doctorate in humane letters from Old Dominion University. She also received the School Bell Award in Education in 2000 and 2002. Turner is a member of the Black Press Hall of Fame.

Patricia Turner was interviewed by The HistoryMakers on May 14, 2010.

See how Patricia Turner is related to other HistoryMakers
Donate Now
Click Here To Explore The Archive Today!