Information about Patricia Stephens Due 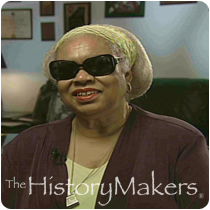 Favorite Color:
Black, Purple, Red
Favorite Food:
Macaroni and Cheese
Favorite Time of Year:
Fall, Winter
Favorite Vacation Spot:
None
Favorite Quote:
Just Do Your Best And That's All You Can Do.

Favorite Color:
Black, Purple, Red
Favorite Food:
Macaroni and Cheese
Favorite Time of Year:
Fall, Winter
Favorite Vacation Spot:
None
Favorite Quote:
Just Do Your Best And That's All You Can Do.

See how Patricia Stephens Due is related to other HistoryMakers

Patricia Stephens Due has been a lifelong civil rights activist. For over forty years she has been steadfast in her commitment to the modern civil rights movement and in teaching younger generations about the history of the Black freedom struggles during the second half of the 20th century. Due was the leading force in the nation’s first “Jail-In”, as a college student at Florida A&M University in 1960, she chose a jail cell rather than paying a fine for sitting at the “Whites Only” lunch counter at a Woolworths store in Tallahassee, Florida.

Due was born in 1939 in Quincy, Florida to Lottie Mae Powell Stephens and Horace Walter Stephens. She was a middle child of three. Her sister Priscilla was born in 1937 and her brother Walter in 1941. Her childhood years were spent in an area of Quincy called St. Hebron (a rural family community) and in Miami and Belle Glade in southern Florida. At age 13, she and her sister defied segregationist laws in Quincy when they stood in the line at a Dairy Queen marked WHITE ONLY, ignoring the COLORED WINDOW. Due graduated from high school in Belle Glade and entered Florida A&M University (FAMU) in Tallahassee in the fall of 1957.

During the summer of 1959, Due and her sister attended an interracial workshop on non-violent civil disobedience sponsored by CORE – The Congress of Racial Equality. After that, she organized FAMU students and led her sister and five others in a lunch counter sit-in. Thus began Due’s life-long commitment to the civil and human rights struggles of black Americans.

In 1963, Patricia Stephens married FAMU law student, John D. Due, Jr., a prominent civil rights attorney. In 1964, Due was selected by CORE to serve as Field Secretary for the organization’s first voter education and registration project in North Florida. Due’s North Florida CORE Project registered more Blacks than any other region of the South.

Due continued to be involved with protest marches and boycotts after her successful voting rights work. Although, she was suspended several times from FAMU for her activism, her speaking and fund-raising tours also interfered with her studies. Due did not receive her degree until 1967.

Due’s dedication to the Civil Rights Movement has inspired a generation of young Black and White students to make extraordinary sacrifices to secure the rights protected in the Constitution for all Americans. Over the years, Due has given lectures, presentations, enactments and workshops on civil rights history to thousands of high school and college students, parents, teachers and to church and civic groups across the country.

Due co-authored with her daughter Tananarive Due, Freedom in the Family: A Mother-Daughter Memoir of the Fight for Civil Rights (ONE World/Ballantine, 2003). The book, too, is both a detailed history of the 1960’s civil rights activism in Tallahassee and across Florida, and a personal, intimate and painful look at the sacrifices and consequences to one family who gave their lives to the Civil Rights Movement and progress. Due and her daughter chronicle the price of activism both on their family and on the families of other civil rights activists they knew and worked with.

She and her husband live in Quincy, Florida. They have raised three daughters: Tananarive Due, a prize winning novelist, Johnita Due Willoughby and Lydia Due Greisz, both attorneys-at-law.

Patricia Stephens Due passed away on Feburary 7, 2012.

See how Patricia Stephens Due is related to other HistoryMakers
Click Here To Explore The Archive Today!