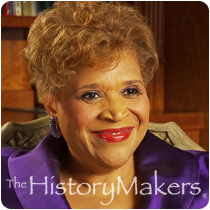 Motivational speaker Patricia Russell-McCloud was born on September 14, 1946, in Indianapolis, Indiana to Willie and Janiel Russell. The youngest of three daughters, Russell-McCloud delivered her first major speech at the age of eight, before the convention of the African Methodist Episcopal Zion Church convention in Los Angeles. In 1964, Russell-McCloud graduated from Shortridge High School in Indianapolis and went on to receive her B.A. degree in history in 1968 from Kentucky State University in Frankfort, Kentucky. In 1970, she enrolled at the Howard University School of Law and received her J.D. degree in 1973.

In 1973, Russell-McCloud began working for the Federal Communications Commission (FCC) in Washington D.C and by 1974, she was involved in a recommendation to the U.S. Department of Justice that eventually led to the Supreme Court case United States vs. AT&T , which broke up what was then the largest monopoly in the United States. Russell-McCloud received several promotions, eventually becoming the head of the Complaints Branch within the Broadcast Division of the FCC. In 1982, she met E. Earl McCloud, a minister and military science instructor at Alabama A&M University and they married in 1983. That same year, she left the FCC to begin her own motivational speaking business, Russell-McCloud Associates.

Over the past 27 years, Russell-McCloud has become one of the most sought-after motivational speakers in the nation. Her clients include McDonalds, the United States Navy, Coca-Cola, United Auto Workers and a host of other prominent companies. Black Enterprise Magazine named her the fifth best motivational speaker in 1998. From 1994 to 1998, Russell-McCloud served as president of the Links, Inc. Her book, A is for Attitude: An Alphabet for Living was published in 1999, and she has released an audio CD of her speeches entitled Never Give Up and a separate recording of her speech The Power of Connecting . Russell-McCloud has received numerous honors, including the keys to more than 300 cities.

See how Patricia Russell-McCloud is related to other HistoryMakers
Donate Now
Click Here To Explore The Archive Today!