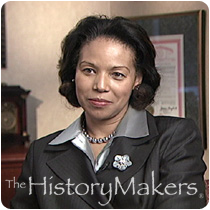 Favorite Color:
Red
Favorite Food:
Barbecue (Ribs)
Favorite Time of Year:
Fall
Favorite Quote:
It Is Okay To Be Accustomed To Being The Center Of Attention, But You Should Never Let It Go To Your Head.

Favorite Color:
Red
Favorite Food:
Barbecue (Ribs)
Favorite Time of Year:
Fall
Favorite Quote:
It Is Okay To Be Accustomed To Being The Center Of Attention, But You Should Never Let It Go To Your Head.

See how Patricia Mell is related to other HistoryMakers

John Marshall Law School Dean Patricia Mell was born December 15, 1953 in Cleveland, Ohio. Her father, Julian Cooper Mell, was one of Cleveland’s first black homicide detectives and her mother, Thelma Webb Mell, was a school principal. Mell attended Doan Elementary School on the East Side. She graduated from Collinwood High School in 1971. Mell chose Wellesley College and graduated with an A.B. degree with honors in 1975. Going immediately to Case Western Reserve Law School, she earned a J.D. in 1978.

Mell worked for the Ohio Attorney General’s Office as a trial lawyer and assistant attorney general in the Regulatory Division from 1975 to 1982. She was the corporation counsel for the Ohio Secretary of State from 1982 to 1984. At Capital University Law School in Columbus, Ohio Mell served as visiting assistant professor in 1984 and 1985. She was assistant professor at University of Toledo Law School and associate professor at Widener University by 1986. In 1989, Mell participated in the Economics for Law Professors, George Mason University Program at Dartmouth. Mell joined the legal firm of Lewis, White and Clay in Detroit in 1991 and taught as an adjunct at Wayne State University. Joining the faculty of the Michigan State University – Detroit College of Law in 1992, Mell was associate dean for academic affairs from 1998 to 2001. She was visiting professor at the University of Memphis Cecil C. Humphreys School of Law before her appointment as dean of John Marshall Law School in Chicago in 2003. Mell is the first woman and first African American dean in the school’s 104-year history.

Mell’s expertise lies in the area of criminal law, the legal aspects of commerce, corporations and partnerships. Interested in privacy and computers and constitutional rights she has written about the U.S. Patriot Act. Mell also authored a textbook entitled Criminal Law: Cases, Commentary and Questions (2005). Married to Dr. Michael Ragland, Mell has three stepchildren.

See how Patricia Mell is related to other HistoryMakers
Click Here To Explore The Archive Today!