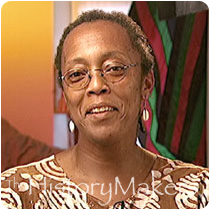 See how Patricia Hill is related to other HistoryMakers
Donate Now

The oldest of three children, Patricia Lynne Hill was born on July 10, 1951 in Chicago, Illinois. Her parents, Lucille Fleming and Hercules Richardson, migrated from the South. Hill (then Richardson) earned a diploma in 1968 from Harlan High School. As a youth, Hill excelled in athletics, touring the nation with Chicago's Mayor Daley Youth Foundation track team, where she was mentored by Olympians Willye White and Ira Murchison. Hill barely missed making the U.S. Olympic Team in 1968 at the finals in Pomona, California. In the 1970s, she was a pioneer in women's professional basketball as a member of the Chicago Debs.

Hill attended Northern Illinois University in DeKalb, but moved back home to finish her B.S. at Chicago State University. She spent her last year as a physical education instructor in the Chicago Park District, and then used her degree to become a public school teacher in 1974. Finally, Hill turned to a career in law enforcement in 1986, serving as a bodyguard to Mayor Harold Washington in 1987.

An outspoken community-oriented police officer, Hill served as both president and executive director of the African-American Police League. She brought her views on racial profiling of drivers and controversial shootings of civilians by police officers to such venues as the Medill School of Journalism and the Chicago Headline Club. She was a sounding board for the black media on important crime and safety issues.

A member of the Black United Front and the National Black Police Association, Hill also worked with Demico Youth, a cultural arts program serving the Cabrini Green housing project, where she developed the now famous Near North Little Leagues. She threw her hat into the political arena in 1999 when she unsuccessfully ran against Dorothy Tillman for the Third Ward aldermanic seat. Hill has three adult children: Trennie, Stacy and Ronald.

See how Patricia Hill is related to other HistoryMakers
Donate Now
Click Here To Explore The Archive Today!