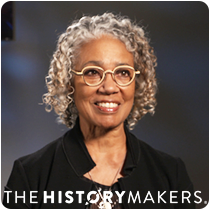 See how Patricia Cruz is related to other HistoryMakers
Donate Now

Arts administrator Patricia Cruz was born on January 1, 1947 in Chicago, Illinois to Nelson Marshall and Myrtle Smith. She graduated from Hirsch High School in Chicago, Illinois and attended Columbia College in Chicago and Southern Illinois University in Carbondale, Illinois where she studied theater. Cruz went on to graduate from the Goodman School of Theater.

Cruz was a student, actress and activist in Chicago before moving to New York City where she met her husband, artist Emilio Cruz. Following a year in St. Louis with the Black Artist Group, she returned to Chicago while her husband taught at the Art Institute of Chicago. She and her husband, Emilio, also worked together making and producing plays that he wrote. In 1982, they returned to New York City where she accepted a position as deputy director for programs at the Studio Museum in Harlem. In 1998, Cruz accepted a position as executive director at Aaron Davis Hall Inc., an arts non-profit in Harlem that commissioned, staged, and supported artists of color. Her responsibilities included overseeing programing, administrative management, and fundraising. Cruz helped to raise over $26 million to renovate the Gatehouse which became the new home for Aaron Davis Hall Inc., and was rebranded as Harlem Stage in 2006. Cruz worked to expand programming and introduced a major commissioning program, known as, WaterWorks, to commemorate the original function of the Gatehouse as the historic conduit for clean water from the Croton Aqueduct. In addition, Cruz also expanded programming at Harlem Stage, introducing Uptown Nights, and Harlem Slide and commissioned numerous artists including Jason Moran, Vijay Iyer and Stew, while serving thousands of students annually and collaborating with a number of nonprofits including Harlem School for the Arts, Repertorio Espanol, Manhattan School of Music and Carnegie Hall.

Cruz served as a board member of the Urban Assembly; she formerly served on the boards of the Andy Warhol Foundation, Art Table and was the president of The New York Foundation for the Arts. Cruz also serves as a member of the Cal Arts Board of Overseers and is a member of the Tony Nominating Committee and the Brendan Gill jury of the Municipal Arts Society. In 2014, Harlem Stage was awarded the Charles Dawson Award for programmatic excellence and sustained achievement in programming from the Association of Performing Arts Presenters.

Patricia Cruz was interviewed by TheHistoryMakers on December 8, 2017.

See how Patricia Cruz is related to other HistoryMakers
Donate Now