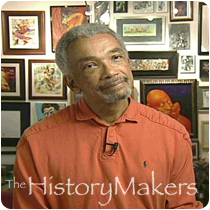 See how Patric McCoy is related to other HistoryMakers
Donate Now

Art collector and environmental chemist Patric Gregory McCoy was born on December 20, 1946, in Chicago, Illinois. McCoy graduated as class valedictorian from Englewood High School in Chicago in 1964. He received his B.A. degree in chemistry in 1969 from the University of Chicago. Beginning in 1972, McCoy was employed as the chief chemist for the Gary, Indiana, Air Pollution Control Department while taking graduate courses part-time. He received his M.A. degree in environmental science from Governors State University in 1979.

From 1979 to 2006, McCoy worked with the Air and Radiation Division of the United States Environmental Protection Agency Regional Office in Chicago, inspecting sites to ensure their conformity with EPA standards. While there, he authored a number of technical papers on environmental science and industry regulation. McCoy retired from the EPA in 2006 after serving for 10 years as a national expert on air pollution control measures for the petroleum refining industry.

Building upon his interest in art that began in college, McCoy co-founded Diasporal Rhythms in 2003. Diasporal Rhythms is a not-for-profit arts organization that promotes the collection of art works by living artists of African descent. McCoy is president of Diasporal Rhythms and a member of its board of directors. His collection contains more than one thousand paintings, drawings, sculptures, collages, and assemblages of African American art. McCoy enjoys taking part in artistic community outreach efforts such as panel presentations and art contests. In May 2008, McCoy was part of a panel presentation on the topic, Black Enough: Black Representation in Contemporary Art Theory and Practice. It investigated the intersection of race, ethnicity, and aesthetics in contemporary art and sought to explain the complexity of race and representation in the art market. In October 2008, McCoy published an article with Dawoud Bey entitled, “Translation,” in the Chicago Artists’ Coalition’s Prompt Art Journal in October 2008.

See how Patric McCoy is related to other HistoryMakers
Donate Now
Click Here To Explore The Archive Today!