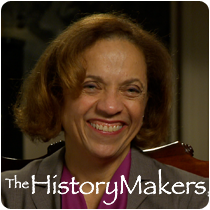 See how Pamela Gunter-Smith is related to other HistoryMakers

In 1981, Gunter-Smith began working as a project manager and research physiologist at the Armed Forces Radiobiology Research Institute (AFRRI) where she supervised three independent laboratories and oversaw an independent research program to assess and mitigate the effects of radiation on intestinal physiology. From 1982 to 1992, Gunter-Smith held faculty appointments at the Uniformed Services University of the Health Sciences and George Washington University. In 1992, Gunter-Smith was appointed as chair of the biology department and associate provost for science and mathematics at Spelman College in Atlanta, Georgia. During her tenure, she directed the Howard Hughes Medical Institute Biomedical Program, improved the curriculum in the natural sciences, facilitated the development of grants for the natural and social sciences, and was instrumental in providing a number of opportunities for the faculty and students. While at Spelman, she played a major role in fund-raising and developing institutional grants from private foundations and federal agencies. In 2006, she joined Drew University as its first provost and academic vice president. As the chief academic officer, she helped to develop and implement a new vision statement to strengthen the natural science departments. Gunter-Smith has been instrumental in developing a successful strategic plan, which resulted in a twenty-five percent increase in undergraduate enrollment.

Pamela J. Gunter-Smith was interviewed by The HistoryMakers on March 11, 2013.

See how Pamela Gunter-Smith is related to other HistoryMakers
Click Here To Explore The Archive Today!