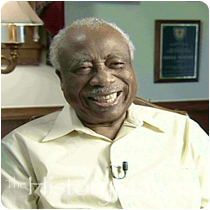 Favorite Color:
Black, Blue
Favorite Food:
Steak, Seafood
Favorite Time of Year:
All Seasons
Favorite Quote:
What Is Required Of Thee Old Man? But To Do Justly. But To Love Mercy And But To Walk On Land.

Favorite Color:
Black, Blue
Favorite Food:
Steak, Seafood
Favorite Time of Year:
All Seasons
Favorite Quote:
What Is Required Of Thee Old Man? But To Do Justly. But To Love Mercy And But To Walk On Land.

See how Ozell Sutton is related to other HistoryMakers
Donate Now

Civil rights activist and community leader Ozell Sutton was born on December 13, 1925, on a plantation in southeast Arkansas in the city of Gould. Sutton‘s mother was a widow who raised eight children: six boys who worked as cotton sharecroppers, and two girls who cooked and did laundry. Despite grueling hours and backbreaking work on the cotton plantation, Sutton managed to graduate from Dunbar High School in Little Rock, Arkansas.

In 1944, Sutton became one the first African Americans to serve in the United States Marine Corps. After surviving bloody conflicts from the Solomon Islands to Saipan, Sutton enrolled in Philander Smith College where he received his B.S. degree in 1950. Sutton became the first black reporter for the white-owned publication Arkansas Democrat; he also served as one of the escorts for the Little Rock Nine in 1957. In 1961, Sutton became director of the Arkansas Council on Human Relations where he was part of the group that began the Community Relations Service (CRS). Sutton was given responsibility for the civil rights and opportunity groups that became known as the Equal Employment Opportunity Commission (EEOC) in 1964.

Sutton’s involvement in the Civil Rights Movement included his role as a field representative for the Community Relations Service. Sutton was at the Lorraine Hotel in the room next door to Dr. Martin Luther King, Jr. in Memphis, Tennessee when Dr. King was assassinated in 1968. Sutton then became Special Assistant to the late Governor Winthrop Rockefeller of Arkansas. In 1972, Sutton directed the Justice Department’s Community Relations Service and was responsible for the department’s racial and ethnic conflict prevention and resolution efforts.

In 1990, Sutton served on the board of the National Center for Missing and Exploited Children. In 1994, Sutton received the Distinguished Service Award from the United States Department of Justice. Sutton was a former national president of Alpha Phi Alpha Fraternity, Inc. and continued to be a civil rights activist.

See how Ozell Sutton is related to other HistoryMakers
Donate Now
Click Here To Explore The Archive Today!