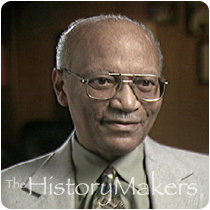 Favorite Color:
Blue
Favorite Food:
Turkey Burgers
Favorite Time of Year:
Christmas
Favorite Vacation Spot:
Aruba
Favorite Quote:
We Can Do What I Can Never Do.

Favorite Color:
Blue
Favorite Food:
Turkey Burgers
Favorite Time of Year:
Christmas
Favorite Vacation Spot:
Aruba
Favorite Quote:
We Can Do What I Can Never Do.

See how Owen Nichols is related to other HistoryMakers

Owen Douglas Nichols was born on April 8, 1929 in Raleigh, North Carolina. His mother was a homemaker and his father worked as a janitor at Meredith College. He earned his high school diploma from Washington High School in 1948 where he was active in the band and Glee Club and valedictorian of his class.

Nichols attended Shaw University from 1948 until 1950 on an academic scholarship. While at Shaw, he worked as a lab assistant and pledged Alpha Phi Alpha Fraternity. In 1950, he joined the United States Army, and attended Officers Candidate School in Fort Raleigh, Kansas. He was also accepted in the Army Corps of Engineering program and served his country in Korea. He retired from the army in 1953, returned to Shaw, and earned his bachelor’s of science degree in chemistry in 1955. Nichols then went on to earn his master’s degree in physical chemistry from Howard University in 1958.

From 1958 until 1959, Nichols worked as an associate professor of chemistry at South Carolina State College. Leaving South Carolina State, he was a Research Chemist at the United States Naval Research Laboratory in Washington, D.C., until 1962. Nichols spent the next four years working as a physical science analyst for the Defense Documentation Center in Alexandria, Virginia. From 1966 until 1968, he worked as a deputy director for the National Air Pollution Control Administration, where he was responsible for processing technical information on air pollution. In 1969, Nichols was recruited to Howard University by his former classmate at Shaw, James Cheek, who was then serving as Howard’s President. Nichols served in various positions at Howard for nearly twenty years. When he retired in 1988 he was the vice president for administration and secretary of the Board of Trustees.

Since 1989, Nichols has served as an advisor, coordinator and organizer for the African American Festival of Academic Achievement, an event highlighting the accomplishments of Montgomery County Maryland’s youth. In 1995, Nichols was appointed to the Montgomery College (Maryland’s largest community college) Board of Trustees.

Nichols has received numerous awards and honors for his civic, community and educational achievements. He is the author of several publications including a book in memory of his father, titled Things My Father Taught Me, which was published in 1998.

See how Owen Nichols is related to other HistoryMakers
Click Here To Explore The Archive Today!