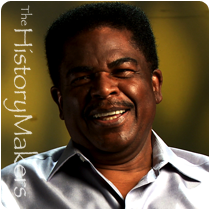 See how Ovie Carter is related to other HistoryMakers

Photojournalist Ovie Carter was born on March 11, 1946 in Indianola, Mississippi to Grover and Mary Carter. Carter grew up in several different cities and attended Douglass High School in Memphis, Tennessee and John Marshall High School in Chicago, Illinois before graduating from Soldan High School in St. Louis, Missouri in 1964. He went on to attend Forest Park Community College. Carter served with the U.S. Air Force and upon his discharge; Carter attended the Ray Vogue School of Photography, now the Illinois Institute of Art. Directly after graduation, Carter was hired to work at The Chicago Tribune.

In 1974, Carter traveled for nearly three months through African and India with fellow Chicago Tribune reporter William Mullen documenting the famine affecting almost half a billion people. Their journey, entitled Faces of Hunger, appeared in The Chicago Tribune as a five-part series and won the 1975 Pulitzer Prize in international reporting. Photos from the series also won Carter the World Press Photo Contest in Amsterdam and the Overseas Press Club of America Award. In 1992, Mitch Duneier and Carter published the book Slim’s Table, based on Duneier’s Ph.D. dissertation. The two paired up again to publish Sidewalk in 2000 before Carter’s retirement in 2004.

Carter was named the Illinois Press Photographers Association’s Photographer of the Year in 1973-1974 and he has won the National Association of Black Journalists Excellence Award twice. In 2000, The Chicago Tribune honored Carter at their annual banquet for his thirty years of service. Carter also received the National Association of Black Journalists “Legends in Their Own Time” Distinguished Career award in 2004. Carter is a member of the Chicago Alliance of African American Photographers.

Ovie Carter was interviewed by The HistoryMakers on May 26, 2010.

See how Ovie Carter is related to other HistoryMakers
Click Here To Explore The Archive Today!