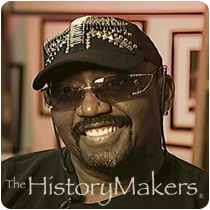 See how Otis Clayborn Williams is related to other HistoryMakers

Baritone vocalist and member of the legendary R&B group The Temptations, Otis Clayborn Williams was born on October 30, 1941 in Texarkana, Texas to Hazel Louise Williams and the elder Otis Miles. At the age of ten, Williams and his mother relocated to Detroit, Michigan, and he began using his mother’s last name. In 1955, Williams attended Detroit’s Northwestern High School where he became classmates with future-Temptations Melvin Franklin and Richard Street. As an adolescent, Williams became interested in music and joined with fellow classmates to form singing groups such as Otis Williams and the Siberians, The El Domingoes and The Distants.

As a member of The Distants, Williams sang baritone alongside Melvin Franklin and Al Bryant and was the co-writer of the group’s hit song “Come On.” However, his fame with The Distants became short lived once the group received an offer from the president of Motown Records, Berry Gordy. In 1961, Williams witnessed The Primes, an R&B group consisting of future-Temptations members Paul Williams and Eddie Kendricks, perform live and was encouraged to ask them to join with him, Franklin and Bryant in the creation of The Elgins. The group later changed their name to The Temptations, auditioned for Gordy and was offered a recording contract on the spot. As a member of The Temptations, Williams began performing at local clubs in Detroit, as well as singing backup for various Motown acts.

In 1961, Williams married Josephine Rogers, and that same year, Rogers gave birth to a son, Otis Lamont Williams. Then, in 1962, The Temptations earned commercial success by releasing their album Dream Come True. A year later, original member Al Bryant left the group and was replaced by tenor David Ruffin. Changes in the group’s roster would continue and Williams would see as many as eighteen different group members throughout his tenure with The Temptations. After the death of original group member Melvin Franklin in 1995, Williams became the longest-tenured Temptation.

During the mid-1970s, The Temptations experienced some creative differences with Gordy. In 1976, they signed with Atlantic Records where they remained until 1979 when they returned to Motown. Although Williams would never sing lead on any of the group’s songs, he has been featured on all of the groups’ albums including Meet the Temptations (1964); Temptin’ Temptations (1965); Cloud Nine (1969); Psychedelic Shack (1970); Temptations Do the Temptations (1976); Bare Back (1978); Back to Basics (1983); Together Again (1987) and Phoenix Rising (1998).

In 1988, Williams co-authored with Patricia Romanowski The Temptations, and, in 1998, NBC aired a two-part miniseries based on the book.

Williams lives with his wife, Goldie, in Los Angeles, California.

Williams was interviewed by The HistoryMakers on April 1, 2008.

See how Otis Clayborn Williams is related to other HistoryMakers
Click Here To Explore The Archive Today!