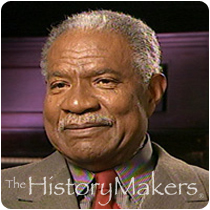 See how Ossie Davis is related to other HistoryMakers
Donate Now

Ossie Davis was born on December 18, 1917, in Cogdell, Georgia, to loving parents and a supportive extended family. Graduating in the top five percent of his class with an already burgeoning interest in theater, Davis had to earn enough money before venturing on to college. A year after graduation, with his savings in tow, Davis hitchhiked from Georgia to Washington, D.C., to live with his aunts. There, he received the National Youth Administration scholarship and enrolled at Howard University in the fall of 1935.

At Howard University, Davis would find a nurturing environment to cultivate both his ideas and his talents. Impatient to try his luck on the actual stage, Davis left Howard University for New York City. It was in Harlem in 1939 that he became involved with the Rose McClendon Players.

Davis made his Broadway debut in 1946 in Jeb, where he met his wife and fellow actress, Ruby Dee. Davis went on to perform in many Broadway productions, including Anna Lucasta, The Wisteria Trees, Green Pastures, Jamaica, Ballad for Bimshire, A Raisin in the Sun, The Zulu and the Zayda, and the stage version of I'm Not Rappaport. In 1961, he wrote and starred in the critically acclaimed Purlie Victorious. Davis was inducted into the Theater Hall of Fame in 1994.

Davis has written and directed numerous films, including Cotton Comes to Harlem and Countdown at Kusini (co-produced with his wife), the first American feature film shot entirely in Africa by Black professionals. He most recently appeared in the films Dr. Dolittle, Get on the Bus, and I'm Not Rappaport.

Davis has received innumerable honors and citations, including the Hall of Fame Award for Outstanding Artistic Achievement in 1989; the U.S. National Medal for the Arts in 1995; the New York Urban League Frederick Douglas Award; NAACP Image Award; and the Screen Actor's Guild Lifetime Achievement Award in 2001. He has enjoyed a long and luminous career in entertainment along with his wife and fellow performer, stage and screen collaborator, and political activist, Ruby Dee. They have recently published a joint autobiography, With Ossie and Ruby: In This Life Together.

See how Ossie Davis is related to other HistoryMakers
Donate Now
Click Here To Explore The Archive Today!