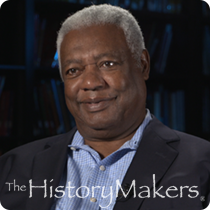 Basketball player Oscar Robertson was born on November 24, 1938 in Charlotte, Tennessee to Mazell Bell Robertson and Bailey Robertson, Sr. During World War II, Robertson and his family moved to Indianapolis, Indiana, where he played on the basketball team at Crispus Attucks High School. The team became the first all-black high school team to win a state championship in the United States in 1955; and in 1956, they secured their second title with an undefeated season. Robertson went on to attend the University of Cincinnati, where he played varsity basketball from 1957 to 1960. There, he led the nation in points per game for all three seasons, and became the all-time leading NCAA scorer by the end of his college career – twice leading the team to the NCAA Final Four. Robertson graduated from the University of Cincinnati with his B.S. degree in business in 1960.

Robertson won a gold medal as co-captain of the U.S. men’s basketball team at the 1960 Summer Olympics in Rome. That same year, he was recruited to the NBA as the first overall draft pick. Playing for the Cincinnati Royals, he won the NBA Rookie of the Year award after scoring 30.5 points per game and leading the league in assists. In his second NBA season, Robertson became the first player to average a triple-double, also breaking the single-season record for assists. He was selected for the All-NBA First Team in each of his first nine seasons with the Royals. In 1970, Robertson was traded to the Milwaukee Bucks, where he played alongside Kareem Abdul-Jabbar. He won his only NBA title in 1971, and retired from basketball in 1974. Additionally, Robertson served as the president of the NBA Players Association from 1965 to 1974, making him the first African American man to head a nationwide labor union in professional sports. He represented the organization in the class-action case Robertson v. National Basketball Association in 1976. The subsequent settlement included the Oscar Robertson Rule, which started free agency in the NBA.

After retiring, Robertson started several businesses, including OR Solutions and Orchem, Inc. He was inducted into the Naismith Memorial Basketball Hall of Fame in 1980. Robertson co-founded the National Basketball Retired Players Association in 1992, and was heavily involved in the Boys Club of New York and the National Kidney Foundation. He also started the Oscar & Yvonne Robertson Scholarship Fund to support minority students at the University of Cincinnati.

Robertson and his wife, Yvonne Crittenden, have three daughters: Shana, Tia, and Mari.

Oscar Robertson was interviewed by The HistoryMakers on September 3, 2016.