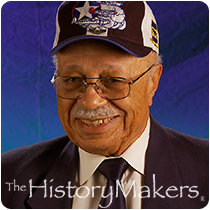 See how Oscar Lawton Wilkerson, Jr. is related to other HistoryMakers
Donate Now

Tuskegee Airman and radio programming executive Oscar Lawton Wilkerson Jr. was born on February 9, 1926 in Chicago Heights, Illinois to Oscar L. and Elizabeth Wilkerson. After his graduation from Bloomfield Township High School in 1944, Wilkerson entered the U.S. Army Air Force’s Aviation Cadet training program in Tuskegee, Alabama. He was assigned to the 617th Bombardment Squadron, where he was trained to fly the B-25 “Billy Mitchell” bomber.

Wilkerson received his commission as a 2nd lieutenant and his “wings” as a B-25 pilot in 1946. In 1947, he graduated from the New York Institute of Photography. Wilkerson also graduated from the Midwest Broadcasting School in 1960. Wilkerson became a weekend disc jockey and community relations director at WBEE-AM in Harvey, Illinois in 1962. As an on-air personality, he was known as “Weekend Wilkie.” As community relations director, he launched a weekly radio show hosted by Chicago Alderman Charles Chew, as well as publicity campaigns for the NAACP, the Chicago Urban League, the Committee of 100 and other organizations. Wilkerson was promoted to the position of program director at WBEE in 1965. Under Wilkerson’s supervision, WBEE launched the radio career of Merri Dee, who became known as “Merri Dee, the Honey Bee.” In 1969, he oversaw the station’s switch to a more jazz-oriented format, and took on the additional responsibilities of operations manager. Wilkerson also hosted his own program, Wilk’s World, on weekday mornings. Wilkerson left WBEE in 1971 to become the public affairs director at WMAQ Radio. In that role, he was responsible for all public service material aired on the station. Wilkerson was named program director at WMAQ in 1973, and served there until his retirement in 1988. Following his retirement, Wilkerson served as president of the Multi Media Ministry at New Faith Baptist Church in Matteson, Illinois. He is one of the “Documented Original Tuskegee Airmen” (DOTAs), and is active in the Chicago “Dodo” chapter of the Tuskegee Airmen Inc. Wilkerson regularly visits schools around the United States to tell the story of the Tuskegee Airmen. He lives in Markham, Illinois.

Oscar Lawton Wilkerson Jr. was interviewed by The HistoryMakers on August 22, 2013.

See how Oscar Lawton Wilkerson, Jr. is related to other HistoryMakers
Donate Now
Click Here To Explore The Archive Today!