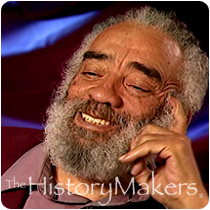 Born October 10, 1926, in Chicago, Oscar Brown, Jr. defied narrow definition. Throughout his forty-year career, he was part jazz singer, part poet, part entertainer and part songwriter. As an aspiring young playwright in 1960, Brown made an unprecedented two-hour appearance on NBC soon after writing "Kicks & Company". Though the play never made it to Broadway, Brown had arrived. He began sharing the stage with such greats as Miles Davis, Dizzy Gillespie, John Coltrane, Nancy Wilson and Julius "Cannonball" Adderley. His London-based, two-hour, one-man show, "Oscar Brown, Jr. Entertains," led him to be hailed as a musical genius. He also made headlines with a project that worked effectively with local gang members, done in conjunction with his performance partner and wife, Jean Pace. Among their many discoveries were the Jackson Five. A composer of several hundred songs and more than a dozen full-length feature pieces, Brown lived in Chicago with his family.