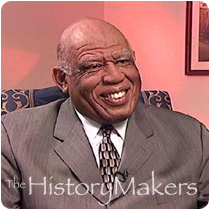 See how Orlando L. Taylor is related to other HistoryMakers
Donate Now

Author and educator Orlando Taylor was born on August 9, 1936, in Chattanooga, Tennessee. His mother was a teacher and his father was a factory worker. Taylor attended Orchard Knob Elementary School through ninth grade. As a youth, he enjoyed listening to the radio, and in 1952, hosted his own show called “Teen Time” on the local radio station. In 1953, Taylor earned his high school diploma from Howard High School.

While attending Hampton University, Taylor participated in a student exchange program at Dennison University in Ohio, where he became a member of an all white fraternity, Delta Epsilon. In 1957, he earned his bachelor’s of science degree in education. While studying for his master’s degree at Indiana University, he joined the NAACP and participated in sit-ins and helped to integrate Bloomington barbershops. He earned his masters degree in 1960. He went on to further his education by earning his Ph.D. in education at the University of Michigan in 1966.

Taylor worked as a speech-language clinician, identifying speech disorders in patients, between 1958 and 1960. From 1960 to 1962, he was the director of the speech and hearing clinic at Fort Wayne State School in Indiana. From 1970 to 1973, Taylor was a professor of communication sciences at the University of the District of Columbia from. In 1972, Taylor and several other colleagues coined the term Ebonics to describe black speech patterns. The term is a combination of the words ebony and phonics. In 1975, Taylor taught students at Stanford University and the University of California at Berkeley as a visiting professor.

Taylor is the author of numerous books, chapters and articles in the field of communication disorders and linguistics. He is also the recipient of numerous awards and honors.

See how Orlando L. Taylor is related to other HistoryMakers
Donate Now
Click Here To Explore The Archive Today!