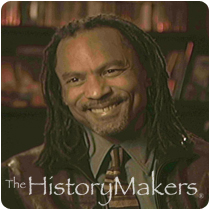 See how Orlando Bagwell is related to other HistoryMakers

Documentary filmmaker Orlando Bagwell was born in Baltimore, Maryland, to Donald Bagwell, Sr. and Barbara Jones Bagwell in a family of seven. He attended Blessed Sacrament School in Baltimore. In 1969, his family moved to Nashua, New Hampshire, where he was a member of the Nashua High School football team. After graduating from high school, Bagwell pursued his B.S. degree in film at the Boston University. He completed his undergraduate studies in 1973 and furthered his education by earning his M.A. degree in broadcast journalism from Boston University in 1975.

In the early 1970s, Bagwell worked for the United South End Settlements (USES) and was active in the organization’s after school program. He later became a substitute teacher for the South Boston Public School District where he taught political science and history. Bagwell was contracted by Boston’s WGBH-TV to work as a film producer in 1975. In 1988, he served as a staff producer for the PBS weekly program Frontline. That same year, he produced a documentary on the Reverend Jesse Louis Jackson, Sr.’s presidential campaign entitled Running with Jesse. In 1989, Bagwell founded the Boston based media company, Roja Productions, Inc. and produced Roots of Resistance: A Story of the Underground Railroad. From 1991 until 1994, Bagwell was the executive vice president for the Eyes on the Prize PBS documentary series on the Civil Rights Movement. He produced episodes of the Blackside series entitled Mississippi: Is this America? and Ain’t Scared of Your Jails for which he received the Alfred DuPont Award and the Peabody Award. In 1995, Bagwell served as the executive producer for the not-for-profit WGBH Educational Foundation, and in 1999, he produced the six hour documentary called Africans in America: America’s Journey through Slavery.

Bagwell became the program officer for the Ford Foundation’s Media Arts and Culture unit in 2004. He works with the unit’s director and oversees international operations to accomplish the foundation’s goals.

Orlando Bagwell was interviewed by The HistoryMakers on December 17, 2007.

See how Orlando Bagwell is related to other HistoryMakers
Click Here To Explore The Archive Today!