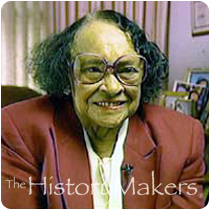 See how Ora Higgins is related to other HistoryMakers

Born in Birmingham, Alabama, in 1910, Ora Higgins was a pioneer in integrating businesses. After moving to Chicago to earn her B.A. degree in personnel administration and her M.A. degree in business law from Northwestern University, Higgins set out on a career that would open doors for countless African Americans.

Higgins went to work for Spiegel, one of the largest mail order retail businesses in the world, after earning her degrees. In 1945, Spiegel began a comprehensive integration of its facilities, and Higgins was placed in charge of the program. In this position, Higgins became the first African American woman to engineer a major industrial integration program. Higgins began her work by initiating an education program for executives and supervisors, helping to break down stereotypes and assuage any fears they might have. From there, she began to manage the personnel, numbering in the hundreds, covering hiring, training, and any problems employees might experience. Spiegel's integration program was complete in every way, paying the same wages to all employees, regardless of race, utilizing the same facilities; she would remain with the company for thirty-one years. In 1950, Higgins was brought in to consult and engineer an integration program for various department stores in the Chicago Loop, the financial and business center of the city. During President Lyndon Johnson's administration, Higgins spoke before the United States Department of Labor on race, poverty, and the need for peace.

In addition to her years of service to Spiegel and her work with integration programs, Higgins was active on a number of organizations and committees. Higgins was a member of the Women's Division of the National Conference of Christians and Jews; the National Chairman of Women in Industry; and a member of the Executive Board of the Metropolitan YWCA. Higgins was also a member of the faculty of Dunbar Vocational Evening School. Clark Atlanta University named a scholarship on Higgins's behalf, and the state of Illinois declared October 27, 2002, Ora Higgins's Youth Foundation Day. In September of 2009, Ora Higgins was honored upon the occasion of her ninety-ninth birthday; at that time she counted a daughter, eighteen grandchildren, and one great-grandchild, among her descendants.

Ora Higgins was interviewed by The HistoryMakers on August 29, 2003.

See how Ora Higgins is related to other HistoryMakers
Click Here To Explore The Archive Today!