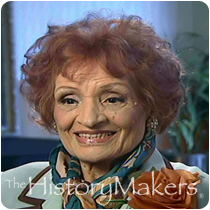 See how Ophelia DeVore is related to other HistoryMakers
Donate Now

Pioneering entrepreneur Ophelia DeVore was born on August 12, 1922 in Edgefield, South Carolina. Her father, John Walter DeVore, was of German and French descent and her mother, Mary Emma Strother, was a combination of Native American and African American. During the 1920s, DeVore attended segregated schools until age nine, when she moved to Winston-Salem, North Carolina to live with her uncle, John Strother, who was co-owner of the African American transportation system, Safeway Bus Company. In 1933, her parents sent her to New York City to live with her great-aunt, Stella Carter, in order to complete her studies. DeVore received her diploma from Hunter College High School and attended New York University where she studied mathematics and languages.

Having attended the Vogue School of Modeling in New York, DeVore became one of the first African American models in the America in 1938 at the age of sixteen. Keenly aware of how African Americans were stereotypically depicted in the printed media, she made it her mission to change these images. In 1946, with the help of four friends, she founded the Grace Del Marco Modeling Agency and in 1948, she opened the Ophelia DeVore School of Self-Development and Modeling. Since then, thousands of people have been nurtured by her agency including Diahann Carroll, Barbara McNair, Cicely Tyson, Richard Roundtree and Raymond St. Jacques. DeVore made a name for herself in Europe as well as in America. She is credited for entering Cecelia Cooper, an African American dancer, into the Miss Festival beauty contest at the 1959 Cannes Film Festival, which she won. In 1960, LeJeune Hundley also from DeVore’s agency was crowned Miss Festival at the Cannes Film Festival.

In addition to her modeling agency, she owns The Columbus Times, a Georgia-based newspaper begun by her second husband, the late Vernon Mitchell. She has maintained the thirty-two year old paper’s strong journalistic excellence and emphasis on African American life and history. Due to her business acumen, she has served as consultant to many of America’s Fortune 500 corporations. DeVore has received more than 200 awards and honors from corporate, political, educational, governmental and social agencies.

DeVore lives in New York with her family.

See how Ophelia DeVore is related to other HistoryMakers
Donate Now
Click Here To Explore The Archive Today!