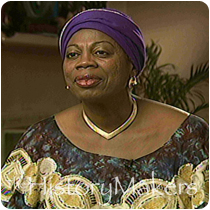 See how Opalanga D. Pugh is related to other HistoryMakers
Donate Now

Professional storyteller Opalanga D. Pugh was born on October 31, 1952, in Denver, Colorado, to Mary Edmonson and John Harris. She also grew up in Denver. In 1975, Pugh received her B.S. degree in communication studies from the University of Wisconsin. Her senior year, as an undergraduate student, she studied at the Imo University of Lagos in Nigeria. Her more extensive informal education includes studying under the instruction of traditional griots in the Gambia, and workshops with African dance choreographer Baba Chuck Davis; African shamans Malidoma and Sobonfu Some; futurist Jean Houston; and motivational speaker Les Brown. Pugh has immersed herself and her work in the realm of communication—including (but not limited to) public relations, group facilitation, mental health, and outdoor education.

Pugh spent an extensive amount of time working, traveling and studying in nine West African countries including the Gambia and Nigeria. While she was there, her studies served as primary sources of learning African oral tradition. Since 1986, she has been a professional storyteller. In addition to that, she has done various keynote addresses as well as facilitated workshops and programs. To date, Pugh has made presentations at thousands of schools in thirty-seven states across the country and over 500 corporations and nonprofit organizations. Her work has taken her across the world. She has shared and collected stories, and hosted events and ceremonies in the United States, Canada, Europe, West Africa, and the Caribbean.

In 1995, Denver’s Westword Magazine named Pugh “Best Storyteller.” She also received the Mayor’s Award for Excellence in the Arts that year. The following year, she was featured as an “African American Living Legend” by NBC-TV. She has been featured in the following publications and media outlets: Women Who Run with the Wolves, The Wall Street Journal, Christian Science Monitor, and on Black Entertainment Television (BET). Pugh was awarded the Urban Spectrum Newspaper “One Who Makes A Difference” Award. She also received the Ambassador of Peace Award from The Conflict Center in Denver.

Other accomplishments include her work with the international relief organization, CARE, to coordinate and present components of their global conference for over 60 country directors surrounding the theme of gender equity and diversity. Pugh was also instrumental in assisting the grieving Columbine High School staff and students through ‘story intervention’ after the tragic shooting in 1999.

Opalanga D. Pugh was interviewed by The HistoryMakers on November 3, 2008.

See how Opalanga D. Pugh is related to other HistoryMakers
Donate Now
Click Here To Explore The Archive Today!