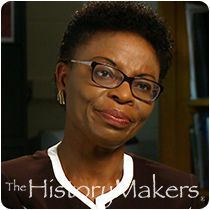 See how Omowunmi Sadik is related to other HistoryMakers

Professor, chemist, and inventor Omowunmi “Wunmi” A. Sadik was born in 1964 in Lagos, Nigeria. Growing up in Nigeria, Sadik was introduced to science by her father, who was a pharmaceutical technician. There were three physicians, one civil engineer, and two nurse practitioners in her family as well. In high school, Sadik was interested in physics, chemistry, and biology. She graduated from the University of Lagos in Nigeria with her B.S. degree in chemistry in 1985 and her M.S. degree in chemistry in 1987. Sadik received her Ph.D. degree in chemistry in 1994 at Wollongong University in Australia. She was awarded a postdoctoral fellowship from the National Research Council (NRC) from 1994 to 1996 to conduct research at the U.S. Environmental Protection Agency (EPA).

In 1996, Sadik was appointed as an assistant professor of chemistry at the State University of New York (SUNY) at Binghamton. From 2000 to 2003, Sadik held visiting appointments at the Naval Research Laboratories, Cornell University, and Harvard University. In 2002, she was promoted to associate professor of chemistry at SUNY-Binghamton; and, in 2005, Sadik became a full professor and was appointed director of SUNY-Binghamton’s Center for Advanced Sensors & Environmental Systems (CASE). Sadik’s research interests are in surface chemistry with a focus on sensors, environmental chemistry and conducting polymers. She has co-authored over 135 peer-reviewed research papers and patent applications, has given 121 keynote and invited lectures, as well as contributed 178 conference lectures, posters, symposia and workshops. Sadik was awarded four U.S. patents for her work on biosensors.

In 2011, Sadik chaired the inaugural “Gordon Conference on Environmental Nanotechnology.” She was appointed to the National Institutes of Health Study Panel on Instrumentation and Systems Development, and has made contributions to scientific and government organizations such as the Environmental Protection Agency, American Chemical Society and National Science Foundation. Sadik has received over $5 million in funding and contracts both from the private sector and government agencies. In 2012, Sadik co-founded the Sustainable Nanotechnology Organization (SNO), a non-profit, international professional society dedicated to advancing sustainable nanotechnology around the world through education, research, and promotion of responsible growth of nanotechnology.

Sadik has been awarded Harvard University’s Distinguished Radcliffe Fellowship, the NSF Discovery Corps Senior Fellowship, the State University of New York Chancellor’s Award for Research, the Australian Merit Award, the SUNY Chancellor’s Award for Outstanding Inventor, and National Research Council (NRC) COBASE fellowship. Sadik was elected as a fellow of the Royal Society of Chemistry in 2010 and of the American Institute for Medical and Biological Engineering (AIMBE) in 2012.

Professor, chemist and an inventor Omowunmi “Wunmi” A. Sadik was interviewed by The HistoryMakers on July 10, 2013.

See how Omowunmi Sadik is related to other HistoryMakers
Click Here To Explore The Archive Today!