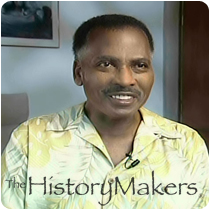 See how Olly Wilson is related to other HistoryMakers
Donate Now

Retired music professor and composer Olly Woodrow Wilson, Jr., was born on September 7, 1937, in St. Louis, Missouri, to Alma Grace Peoples Wilson, a seamstress, and Olly Woodrow Wilson, Sr., an insurance salesman and butler. Wilson’s father had the reputation for having the best speaking voice and being the best singer in the family’s church choir. Wilson’s father insisted that all of his children learn to play the piano. As a result, Wilson learned to play the piano at the age of seven. Wilson attended and graduated from Sumner High School in 1955. He participated in a summer music theory program at Washington University the summer after graduation. Wilson applied and was accepted into Washington University in the fall of 1955. He was one of approximately ten African Americans enrolled at the university. Wilson graduated in 1959, earning his B.M. degree in music. He went on to earn his M.M. degree in music composition in 1960 from the University of Illinois.

In 1960, after receiving his master’s degree, Wilson started to look for employment and was offered a teaching position at Florida A&M University. Wilson remained there for two years and returned to school and earned his PhD from the University of Iowa in 1964. Wilson then returned to teach at Florida A&M University for one year before being offered and accepting a position at the Oberlin Conservatory of Music in 1965. He taught at Oberlin for five years, and in 1970, he joined the faculty at the University of California, Berkeley. In 1971, Wilson received a Guggenheim Fellowship and moved to West Africa to study African language and music firsthand. In 1972, he returned to the University of California, Berkeley, and continued to teach while setting up a program for music students to pursue their doctorate and other musical opportunities at the university. Wilson served as chairman of the music department between 1993 and 1997. He held the Jerry and Evelyn Hemmings Chambers Professorship in Music between 1995 and 1998. Wilson retired as professor emeritus at the University of California, Berkeley, in 2002.

Throughout his career, Wilson wrote articles for scholarly journals and recorded albums. Some of his recordings or compositions include Cetus, Piano Piece, Sinfonia, and In Memoriam Martin Luther King, Jr. Wilson won several awards including the Elise Stoeger Prize from the Chamber Music Society of New York’s Lincoln Center in 1992 and election to the American Academy of Arts and Letters in 1995.

See how Olly Wilson is related to other HistoryMakers
Donate Now
Click Here To Explore The Archive Today!