Information about Ollie B. Ellison, Sr. 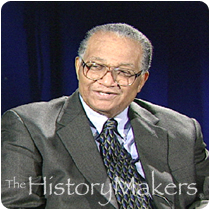 See how Ollie B. Ellison, Sr. is related to other HistoryMakers

Foreign service officer Ollie Benjamin Jefferson Ellison, Sr. was born on February 23, 1927 in Muskogee, Oklahoma. His mother was a schoolteacher; his father, the first African American attorney in the State of Oklahoma. Ellison’s father also served as chairman of the Negro Democratic Party. Ellison graduated from Douglas High School in 1944 and then attended Lincoln University in Jefferson City, Missouri, where he received his B.A. degree in biology in 1949. During his junior year in 1946, Ellison was drafted into the U.S. Army for the Korean War and served in the Military Police Unit in Inchon, Korea. He later entered Indiana University’s graduate program, where he studied clinical psychology and Soviet studies. In 1951, Ellison was sent by the U.S. Army to intelligence school in Berlin, Germany. Upon returning from military duty in Germany, he enrolled in a graduate program in political science at the University of Chicago.

In 1957, Ellison was among the U.S. State Department’s first African American foreign service officers and was assigned to a post in the Middle East. He served in Cairo, Egypt from 1959 to 1964; Bremen, Germany from 1967 to 1970; Kinshasa, Zaire from 1974 to 1978; and Bangkok, Thailand from 1978 to 1981. Between 1981 and 1982, Ellison served in Bangui, Central African Republic; and, from 1983 to 1989, was an officer in Geneva, Switzerland. There, he served as U.S. representative to the United Nations Conference on Trade and Development. As a foreign service officer, Ellison met with several leaders and artists including P.W. Botha, Oliver Tambo, Malcolm X and Maya Angelou. He retired from the U.S. State Department in 1989 and later worked for the National Archives declassification department.

In 1973, Ellison authored the “Employment Practices of U.S. Firms in South Africa”, which appeared in the Johannesburg Star and became known later as The Sullivan Principles. In February of 2013, his career was featured in the U.S. State Department’s State Magazine.

Ellison passed away on May 26, 2015 at the age of eighty-eight. He was married to Lydia A. Ellison and had four children: Ollie B. Ellison, Sylvia J. Ellison, Bonita J. Ellison, and Rebecca W. Ellison.

See how Ollie B. Ellison, Sr. is related to other HistoryMakers
Click Here To Explore The Archive Today!