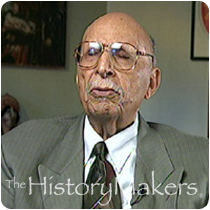 Favorite Color:
Brown, Green
Favorite Time of Year:
Summer
Favorite Quote:
When Day Is Done, Greet The Dawn And Not The Setting Sun.

Favorite Color:
Brown, Green
Favorite Time of Year:
Summer
Favorite Quote:
When Day Is Done, Greet The Dawn And Not The Setting Sun.

See how Oliver W. Hill is related to other HistoryMakers
Donate Now

Born Oliver White in Richmond, Virginia, on May 1, 1907, Oliver Hill’s legal career helped end the doctrine of “separate but equal.” Hill’s father left the family when he was still a baby, and when his mother remarried, he took on her new last name. While attending Howard University, his uncle, a lawyer, died, and his aunt gave Hill all of his old legal books. After reading them, Hill decided to become a lawyer and win back the rights that had been denied to so many. He graduated from Howard Law School in 1933, second in his class only to Thurgood Marshall.

Hill’s early legal career did not foreshadow his later successes. At one point, he even gave up his legal practice and worked as a waiter. He returned to Richmond, however, and has been practicing law there since 1939. The following year, he won his first civil rights case when the city of Norfolk, Virginia, was ordered to pay black teachers the same as white teachers. In 1951, Hill heard that the students at R.R. Moton High School in Farmville, Virginia, had walked out of their dilapidated school. The subsequent lawsuit, Davis v. County School Board of Prince Edward County later became one of the five cases decided under Brown v. the Board of Education. During these years, Hill’s home life was under constant threat. He did not allow his son to answer the telephone because so many threats were coming in, and a cross was burned on his lawn. He persevered, however, and today Hill and his partners have filed more civil rights cases in Virginia than were filed in any other Southern state.

Hill also broke the mold when he and several other Virginia lawyers formed the Old Dominion Bar Association in 1942, and when he successful ran for the city council of Richmond in 1948, becoming the first African American to do so since Reconstruction.

Hill was the recipient of numerous awards over the decades, including being awarded the Presidential Medal of Freedom on August 11, 1999. Students at the University of Virginia also honored Hill when they founded the Oliver W. Hill Black Pre-Law Association. Hill retired from his legal practice in 1998, and today a bronze bust of him is visible at the Black History Museum and Cultural Center of Virginia.

See how Oliver W. Hill is related to other HistoryMakers
Donate Now
Click Here To Explore The Archive Today!