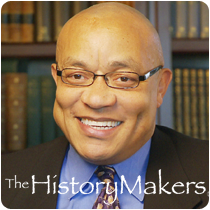 See how Oliver McGee, III is related to other HistoryMakers

In 1997, McGee was appointed senior policy analyst in the White House Office of Science and Technology Policy (OSTP) in the Executive Office of the U.S. President. In 1988, McGee began teaching at OSU as an assistant professor of civil engineering and engineering mechanics. In 1992, McGee became the first African American faculty to be promoted to associate professor with tenure in the century and a quarter year history of OSU’s engineering college. He then became, in 1992, associate professor of civil and aerospace engineering at Georgia Institute of Technology. Along the way, he served in a number of visiting professorships at the Massachusetts Institute of Technology (MIT), including the first opening class of MIT’s Martin Luther King Jr. Visiting Professors. Later, McGee was promoted to full professor and chair of the Department of Civil Engineering & Geodetic Science in 2001, becoming the first African-American full professor and chair in the 150-year history of OSU’s engineering college. Between 1999 and 2001 McGee served as the U.S. deputy assistant secretary of transportation for technology policy at the U.S. Department of Transportation (DOT), and special assistant to the President at the Georgia Institute of Technology. Howard University hired McGee as the school's very first vice president for research and compliance in 2007. Under his leadership, the new office raised the profile of the Howard principal investigator, launched the first-ever research communications documents Research at The Capstone, and constructed a new central management for research facility at Howard University’s C. B. Powell Building, adjacent to the school’s Louis B. Stokes Science Library.

For his research and education initiatives, McGee has been awarded grants totaling more than $8 million. In 2007, he founded the Washington, D.C.-based consulting firm, Partnership Possibilities for America. The firm’s concepts on education, economics, and politics are covered in a number of McGee’s many books and publications. In 2012, he submitted three books for publication, including Bridging the Black Research Gap, available online through Amazon Create Space and Revilo Group Publishing, L.L.C. McGee has authored more than 50 articles appearing in academic journals such as, ASME Journal of Turbomachinery, ASME Journal of Fluids Engineering, ASME Journal of Applied Mechanics, International Journal for Numerical Methods in Engineering, International Journal of Solids and Structures, ASCE Journal of Engineering Mechanics, and Civil Engineering Systems. For his contributions, McGee has been honored by numerous organizations, including the American Council on Education (ACE), American Association of State Colleges and Universities (AASCU), Carnegie Foundation for the Advancement of Teaching, Council for the Advancement and Support of Education (CASE), National Science Foundation (NSF), and National Aeronautics & Space Administration (NASA).

Oliver G. McGee III was interviewed by The HistoryMakers on September 11, 2012.

See how Oliver McGee, III is related to other HistoryMakers
Click Here To Explore The Archive Today!