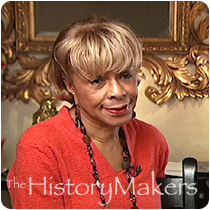 Olive Lee Benson of Boston, Massachusetts, was recognized as a premier hair stylist and an expert in relaxing and straightening hair. Benson was born in Cambridge, Massachusetts, on September 11, 1932, the ninth of ten children. She attended Cambridge public schools, graduating from Cambridge High and Latin School in 1949. After high school, Benson studied at the Wilfred Academy in Boston, where she received her diploma and certification to practice hairdressing and styling. In later years she continued her professional training and education at Pivot Point (Chicago), Vidal Sasson and Jingles (London, England), Clairol (New York) and Wella (Massachusetts).

In 1959, Benson opened a small storefront beauty shop in north Cambridge, in the neighborhood where she grew up. Her clients, mostly African Americans, were women with extremely curly hair. She offered the most advanced styling and hair treatment techniques. Benson moved her Cambridge salon business to Boston in the 1960s. With the success of her first Boston salon, she moved to two larger locations in Boston's upscale downtown retail districts, before opening up her largest enterprise in 1997 in Chestnut Hill, Massachusetts, a nearby suburb. Women from a variety of ethnic and racial backgrounds came to Olive's Beauty Salon to have their curly hair straightened and styled with the most up-to-date fashion.

Following the successful completion of her Hair America examination in 1976, Benson became the designer and coordinator for several industry publications that set seasonal trends for both ethnic and non-ethnic styling. She also became an editorial columnist for Shoptalk Magazine, a national publication for salon professionals. After researching at Soft Sheen, Johnson Products, and other hair care companies, one of Benson's lifelong dreams was realized in 1996, with the creation and marketing of her own line of hair products. The line known as Universal Textures, included a relaxer for all types of hair texture—which she called a “universal relaxer,” a protein hair conditioner, a shampoo and a leave-in conditioner. Her products were marketed under Universal Textures at her Chestnut Hill salon.

A holder of numerous awards, she received a citation and honor as the first black inducted into the Hall of Renown of the National Cosmetology Association in 1991 and awards from the International Beauty Show from 1991 to 1994. In 1996, she was the first African American to receive a North American Hairstyle Award.