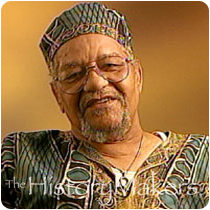 Okoro Harold Johnson, actor, director, and playwright was born May 25, 1925 in Chicago, Illinois. He attended Forestville Elementary and DuSable High School, but graduated from Eureka High School in Meridian, Mississippi. He briefly attended Tougaloo College, but ended up working as a waiter on the Grand Trunk Railroad. Later at Roosevelt University, Johnson became involved at the ground floor of the Chicago Black Arts Movement. Johnson earned a B. A. in Theater from Roosevelt University and an M.A. in Theater from Governor's State University.

Johnson is known for his down to earth approach with both acting and directing. He has exposed people from all walks of life to the magic of the theatre through his productions. Some of his plays include: S. C. L. C: Second Coming, Last Chance, The Regal Theater, Kintu and the Law of Love, and Strange Fruit. Johnson directed among other plays: A Candle in the Wind (featuring William Marshall), A Change is Gon' Come by Joe Turner, Purlie Victorious by Ossie Davis, Fats Waller: His Life and Times by Runako Jahi and Jazz Set by Ron Milner. Johnson produced a now legendary black soap opera, written by Richard Durham for public television called Bird Of An Iron Feather for Chicago's WTTW. His acting skills were featured on Broadway in Ron Milner's Checkmates, in a role that he created. Film credits include: The Spook Who Sat by the Door, The Wedding and A Raisin In The Sun.

Johnson served as Artistic Director at ETA Creative Arts Foundation for 17 years and was director of South Shore Cultural Center. Johnson has taught theatre at the college and community level. He is the recipient of the Paul Robeson Award from the African American Arts Alliance of Chicago.

See how Okoro Harold Johnson is related to other HistoryMakers
Donate Now
Click Here To Explore The Archive Today!