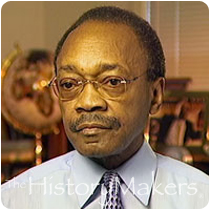 See how Ofield Dukes is related to other HistoryMakers

Public relations guru Ofield Dukes was born in Rutledge, Alabama, on August 8, 1932. After serving in the Army from 1952 to 1954, Dukes went on to Wayne State University in Detroit and graduated in 1958 with a degree in journalism.

After graduating, Dukes spent several years working at WCHB radio as the news director. In 1961, unable to get a job with any of the white-owned newspapers, Dukes went to work on The Michigan Chronicle. He found himself writing virtually all the articles, from editorials to politics, front-page news and music reviews. In 1964, Dukes won three awards for his writing from the National Newspaper Publishers Association, a Washington, D.C.-based organization of black-owned newspapers. Later that year, President Lyndon B. Johnson appointed him deputy director of the President's Committee on Equal Employment Opportunity & Plans for Progress. The following year, he became the deputy director of public affairs for the White House Conference to Fulfill These Rights, where he stayed until 1969. In addition to this, he was appointed to Vice President Hubert Humphrey's staff in 1966 as an assistant. Following Johnson's decision not to seek reelection in 1968 and Humphrey's loss in his bid for the White House, Dukes became disillusioned. In 1969, he established Ofield Dukes & Associates, a Washington-based public relations firm, with Motown Records as his first client. Today, they serve Sony Music Entertainment, RJR Nabisco and the Congressional Black Caucus, among others.

Between 1972 and 1983, Dukes served as an adjunct professor of public relations at Howard University, and since 1993 he has served in the School of Communications at the American University in the same capacity. He has been a communications consultant for every Democratic presidential campaign since 1972 and helped organize the first Congressional Black Caucus dinner. He is also the founder of the Black Public Relations Society of Washington.

See how Ofield Dukes is related to other HistoryMakers
Click Here To Explore The Archive Today!