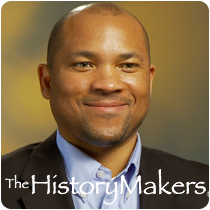 See how Odest Jenkins is related to other HistoryMakers
Donate Now

Upon graduating, Jenkins was awarded a postdoctoral research award in the Computer Science Department at the University of Southern California, Los Angeles. In 2004, Jenkins joined the faculty in the Department of Computer Science at brown University as an assistant professor. He was promoted to associate professor in 2010. Jenkins is the leader of Robotics, Learning and Autonomy Group at Brown University. The group explores topics related to human-robot interactions and robot learning with a specific focus on robot learning from human demonstration and robot software systems. Jenkins works with Brown University faculty and graduate students to develop methods for autonomous robot control and perception. In 2011, Jenkins worked to develop the “PR2 Remote Lab,” a remote-controlled computer laboratory designed to promote collaborative research and documentation.

Jenkins’ research has been published in numerous scholarly and professional journals, including Human-Robot Interaction, Computer Vision and Pattern Recognition. In 2010, Jenkins published Creating Games: Mechanics, Content, and Technology. He has also served on the editorial board for International Journal of Robotics Research, and the International Journal of Humanoid Robotics.

Jenkins is a recipient of the Presidential Early Career Award for Scientists and Engineers for his work in physics-based human tracking from video. In 2009, Jenkins was the recipient of the Sloan Reseearch Fellowship, and, was as selected as the National Academy of Science’s Kavi Fellow. He has received research funding from the Office of Naval Research and the National Science Foundation. In 2010, Popular Science Magazine named Jenkins one of their “Brilliant 10.” Jenkins lives in Providence Massachusetts.

Odest Chadwicke Jenkins was interviewed by The HistoryMakers on November 8, 2012.

See how Odest Jenkins is related to other HistoryMakers
Donate Now
Click Here To Explore The Archive Today!