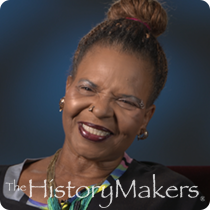 Favorite Color:
Blue
Favorite Food:
Seafood Gumbo
Favorite Time of Year:
Spring
Favorite Vacation Spot:
Bermuda
Favorite Quote:
Not My Will But Thy Will Expressed Through Me.

Favorite Color:
Blue
Favorite Food:
Seafood Gumbo
Favorite Time of Year:
Spring
Favorite Vacation Spot:
Bermuda
Favorite Quote:
Not My Will But Thy Will Expressed Through Me.

See how Ntozake Shange is related to other HistoryMakers

Playwright and author Ntozake Shange was born Paulette L. Williams on October 18, 1948 in Trenton, New Jersey to Paul T. Williams, an air force surgeon, and Eloise Williams, an educator and psychiatric social worker. Her family regularly hosted artists like Dizzy Gillespie, Paul Robeson, and W.E.B. DuBois at their home. Shange graduated cum laude with her B.S. degree in American Studies from Barnard College in New York City in 1970. While pursuing her M.A. degree in American Studies from the University of Southern California, Shange began to associate with feminist writers, poets and performers. In 1971, she adopted her new name, Ntozake, meaning “she who comes with her own things,” and Shange, meaning “she who walks with the lions,” from the Xhosa language. She graduated from the University of Southern California in 1973.

Upon joining Malifu Osumare’s dance company, Shange met Paula Moss, and their subsequent collaborations led to the invention of Shange’s work, the choreopoem for colored girls who have considered suicide / when the rainbow is enuf. The work was initially produced Off-Broadway in 1975 at the New Federal Theatre in New York City, moving to the Anspacher Public Theatre in 1976. After premiering on Broadway at the Booth Theatre later that same year, the play went on to win the Obie Award, the Outer Critics Circle Award, and the AUDELCO Award. Originally conceived as a choreopoem, it has been published in book form, and adapted into a stage play. In 2010, Tyler Perry wrote, produced and directed the film adaptation, For Colored Girls, starring Whoopi Goldberg, Phylicia Rashad, Janet Jackson, and Loretta Devine.

In 1978, Shange released Nappy Edges, a collection of fifty poems celebrating the voices of defiantly independent women. In 1979, she produced the Three Pieces trilogy of choreopoems, which won the Los Angeles Times Book Prize. In 1982, Shange released her first novel, Sassafrass, Cypress, and Indigo, which she followed with Betsy Brown in 1985 and Liliane: Resurrection of the Daughter in 1994.Shange’s work also appeared in The Black Scholar, Yardbird, Ms., Essence magazine, The Chicago Tribune, VIBE, and Third-World Women. In addition to poetry, novels, essays, and screenplays, Shange published four books for children: Whitewash (1997); the tribute to Muhammad Ali, Float Like a Butterfly (2002); Ellington Was Not a Street (2003); Daddy Says (2003); and Coretta Scott (2009). She also served on the faculty of the Department of Drama at the University of Houston.

An Emmy, Tony, and Grammy award nominee, Shange received an NDEA fellowship in 1974, two Obie Awards, a Guggenheim Fellowship in 1981, the Paul Robeson Achievement Award in 1992, the Living Legend Award from the National Black Theatre Festival in 1993. She was inducted into the St. Louis Walk of Fame.

Ntozake Shange was interviewed by The HistoryMakers on September 12, 2016 and February 1, 2017.

See how Ntozake Shange is related to other HistoryMakers
Click Here To Explore The Archive Today!