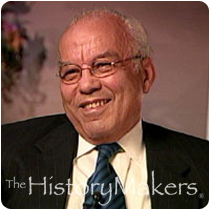 See how Norman Francis is related to other HistoryMakers

Educator and institution builder, Norman C. Francis was born March 20, 1931, in Lafayette, Louisiana. His father, a barber and his mother, a homemaker, sacrificed to send him to St. Paul Catholic elementary and secondary schools. After graduation, Francis attended Xavier University in New Orleans. At Xavier University, Francis began an association that would last a lifetime. Graduating with a B.S. in 1952, Francis was admitted to Loyola University Law School, where he earned a J.D. in 1955. He spent 1956 to 1957 in the U.S. Army's Third Armored Division.

Recruited to return to Xavier, Francis served as dean of men in 1957 and in 1963 was hired as director of student personnel services. In 1964, he was promoted to assistant to the president, in 1967 to executive vice President and in 1968 to president of Xavier University. His presidency has been marked by unparalleled growth. Francis created a campus that is referred to locally as the "Emerald City" because of its aqua/green roofs. The campus' tall structures include a $15 million Library Resources Center, a 430-bed, $13 million dorm, and a $23 million Science Complex, including a new School of Pharmacy. Over the past six years, Xavier has had 470 graduates accepted to medical schools. Enrollment has jumped 35 percent during this same period, to more than 4,000 students.

Francis' thirty-four years as president is among the longest of any college president in the United States. Nelson Mandela, Bill Clinton, Bill Gates, Jesse Jackson and Pope John Paul II have come to New Orleans to commend Francis. His awards include twenty-two honorary degrees and major awards from the UNCF, the National Urban League, and the Southern Association of Colleges and Schools. In 1986, he was named one of the 100 Most Effective College Administrators in America.

See how Norman Francis is related to other HistoryMakers
Click Here To Explore The Archive Today!