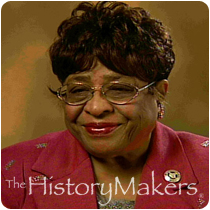 See how Norma White is related to other HistoryMakers

White was inducted into the Beta Alpha chapter of Alpha Kappa Alpha at Florida A&M University (FAMU) in 1950. As a student at FAMU, White was the first female member of the famed FAMU Marching 100 Band to graduate. She graduated in 1955 with her B.S. degree and furthered her education by earning her M.A. degree in music at Columbia University. After graduating, White pursued a career in education in the public schools of Jacksonville, Florida.

White served as Regional Director for the South Atlantic Region from 1974 until 1978 and was successful in raising $100,000 for the United Negro College Fund. She later was elected to the office of First Supreme Anti-Basileus at the 56th Boule in Indianapolis, Indiana. In that capacity, she also served as the first vice-president of the sorority’s Educational Foundation Board. Then, in 1998, White became the 25th Supreme Basileus of Alpha Kappa Alpha at the Boule held in Chicago, Illinois. The theme for her administration embraced six target areas: leadership development, education, health, the black family, economics and the arts. White also initiated the sorority’s “On Track” after school program which targeted at-risk students in grades three through six to prepare them for middle school.

White is Alpha Kappa Alpha’s first Supreme Basileus to be part of a mother-daughter legacy and is honored as the first female member of the famed FAMU Marching 100 Band through Jacksonville, Florida’s proclaimed day for her.

Dr. Norma Solomon White was interviewed by The HistoryMakers on February 27, 2008.

See how Norma White is related to other HistoryMakers
Click Here To Explore The Archive Today!