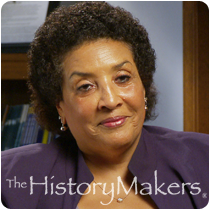 See how Norma Pratt is related to other HistoryMakers
Donate Now

Entrepreneur Norma Russell Pratt was born in Indianapolis, Indiana on January 17, 1945 to Mildred Newberry and Fred L. Russell. Pratt's family moved to Philadelphia where she attended West Philadelphia High School, graduating from there in 1962. Pratt then attended Cheyney University, where she graduated with her B.A. in education in 1966. After working as a school teacher, Pratt became a travel agent for Rodgers Travel, Inc., a company that was co-owned by her father. With her father's passing in 1980, Pratt was named President and CEO of Rodgers Travel. In the 1990s, Pratt enrolled her company, which she incorporated years earlier, into the Small Business Administration's (SBA) 8(a) business development program. With infrastructure assistance from the federal program, Pratt was able to secure a $10 million yearly contract with Scott Air Force Base in St. Clair County, Illinois in 1991, Rodgers' first federal government contract.

Through the SBA 8(a) program, Rodgers won a variety of federal government and municipal contracts from the City of Philadelphia’s Department of Human Services, the Department of Defense, as well as several military bases across the country and Lajes Field in Portugal. Under Pratt's leadership, Rodgers Travel, Inc., which has been in business for sixty years, became a multi-million dollar business.

Pratt has been recognized for her leadership of Rodgers Travel, having garnered the Eastern Pennsylvania Minority Small Business Person of the Year award and recognition from publications such as the Philadelphia Daily News, USA Today and Black Enterprise. She is a member of Alpha Kappa Alpha Sorority, Inc. and Link, Inc. Pratt lives in the suburban Philadelphia area and has two adult children.

Norma Pratt was interviewed by The HistoryMakers on May 21, 2012.

See how Norma Pratt is related to other HistoryMakers
Donate Now
Click Here To Explore The Archive Today!