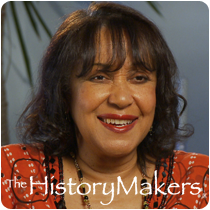 Model and entrepreneur Norma Jean Darden was born in Newark, New Jersey. Darden enrolled at Sarah Lawrence College in Bronxville, New York where she graduated with her B.A. degree in liberal arts in 1961. She then entered the world of modeling while at Sarah Lawrence and was a part of the historic 1973 Models of Versailles show in Paris, which featured twenty models, the first collective of African American models to grace a European fashion runway. Throughout her modeling career, Darden graced the pages of fashion magazines such as Bazaar, Glamour, Mademoiselle and Vogue. After a medical condition forced her to leave the world of modeling in 1975, Darden and her sister Carole launched a catering business. Three years later, they co-wrote a seminal cookbook on Southern cooking titled, Spoonbread & Strawberry Wine: Recipes and Reminiscences of a Family.

Darden then opened her first restaurant in New York City’s Harlem neighborhood called Spoonbread, Inc, which specialized in Southern cuisine. In 1997, Darden opened two more restaurants with Miss Mamie's Spoonbread Too and Miss Maude’s Spoonbread Too restaurants, both in Manhattan. Darden’s Spoonbread Catering has amassed a client list that includes Fortune 500 companies and celebrity clients like Bill Cosby and Oprah Winfrey. In addition, Darden appeared in the motion pictureThe Cotton Club in 1984 and has served as food stylist for the Eddie Murphy film, Boomerang. Additionally, Darden produced a one-woman show based on her book titled Spoonbread and Strawberry Wine, which premiered at the American Place Theatre.

Darden’s restaurants have been featured in publications as diverse as the New York Times, USA Today, Black Enterprise, Essence and Ebony magazines.

Additionally, Darden sits on the Board of the Salvation Army.

Norma Jean Darden was interviewed byThe HistoryMakers on May 14, 2012.

See how Norma Jean Darden is related to other HistoryMakers
Donate Now
Click Here To Explore The Archive Today!