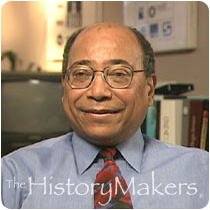 See how Noel Mayo is related to other HistoryMakers
Donate Now

Philadelphia native industrial designer Noel Mayo is the owner and president of Noel Mayo Associates, Inc., the first African American industrial design firm in the United States, whose clients include NASA, IBM, the Department of Commerce and Agriculture, Black and Decker, the Museum of American Jewish History and the Philadelphia International Airport.

Mayo was the first black graduate to receive a B.S. degree in Industrial Design from the Philadelphia College of Art in 1960. He later became chairperson of this department, making him the first African American chairperson of an industrial design program in the United States. He held that post for eleven years and was awarded an honorary D.F.A. degree from the Massachusetts College of Art in 1981.

Mayo has been a regularly published writer magazines and journals such as Innovation, The Wall Street Journal, and The Minority Business Journal. He has been a speaker at various international design symposiums and serves on the boards of numerous professional organizations. He was named the Ohio Eminent Scholar in Art and Design Technology in 1989 at Ohio State University where he taught product, interior and graphic design. Noel advocates alternative methods for education, accelerated learning and information distribution using new technologies and has a personal interest in developing synergistic learning products that include music, color, light and psychology. He has been instrumental in establishing various mentoring programs for minorities and establishing a directory of minority professionals in industrial, graphic, interior and architectural design.

See how Noel Mayo is related to other HistoryMakers
Donate Now
Click Here To Explore The Archive Today!