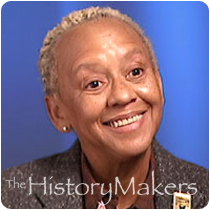 Favorite Vacation Spot:
Beaches
Favorite Quote:
What kind of sense does that make?

Favorite Vacation Spot:
Beaches
Favorite Quote:
What kind of sense does that make?

See how Nikki Giovanni is related to other HistoryMakers
Donate Now

A poet and spoken word artist, Giovanni entered Fisk University in 1960, where she edited the school's literary magazine and became involved in both the Writer's Workshop and the Student Nonviolent Coordinating Committee; she received her B.A. degree in 1967. Giovanni became active in the Black Arts Movement, organizing the Black Arts Festival in Cincinnati; during this period of her life, she developed strong and enduring friendships with fellow writers James Baldwin and Sonia Sanchez. Radicalized by the assassination of Malcolm X and the rise of the Black Panthers, Giovanni's poetry in the 1960s and 1970s became the voice of many African Americans. Later, Giovanni applied for and was accepted into the graduate program of the University of Pennsylvania's School of Social Work; she also went on to study at Columbia University's School of Fine Arts.

In 1970, Giovanni founded her own publishing company, Niktom Limited. Throughout her career, Giovanni published more than fourteen volumes of poetry, including: Black Feeling Black Talk, Black Judgement, Cotton Candy on a Rainy Day, My House, The Selected Poems of Nikki Giovanni and Love Poems. She has also written and published books, including Racism 101 and Blues: For All the Changes. In 1987, Giovanni began working as a professor in the English department of Virginia Polytechnical Institute; there she taught writing, poetry, and literature, and was eventually named a distinguished professor.

Giovanni received many honors and awards for her work, including numerous honorary degrees; the NAACP Image Award for Literature in 1998 and 2000; and the Langston Hughes Award for Distinguished Contributions to Arts and Letters in 1996. Giovanni was also named Woman of the Year by several magazines, including Mademoiselle, Essence and Ladies Home Journal. In 2008, Giovanni was commissioned by National Public Radio's program, All Things Considered, to pen an inaugural poem for President Barack Obama. A popular guest speaker, Giovanni was invited to read poetry at the Lincoln Memorial for the bicentennial celebration of Lincoln's birth in 2009.

Nikki Giovanni was interviewed by The HistoryMakers on January 31, 2003.

See how Nikki Giovanni is related to other HistoryMakers
Donate Now
Click Here To Explore The Archive Today!