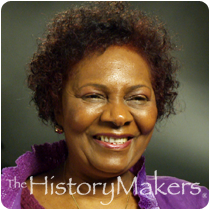 See how Nicole Smith is related to other HistoryMakers

Curator Nicole Smith was born in the Republic of Haiti. In 1971, she began her career as a curator at the Centre d’art in Port-au Prince, Haiti. In search of new adventures, Smith moved to the United States in 1973.

At first, she sold Haitian work from her home and automobile before opening the Nicole Gallery in 1986. Smith was instrumental in bringing Shona stone sculpture from Zimbabwe into prominence and the Nicole Gallery maintained one of the most comprehensive collections of Shona sculpture in the United States. The gallery came to represent one of the finest collections of world renowned Haitian, African and African African artists. With many of these artists, Smith represented them and fostered their careers including Nigerian artists such as N’Namdi Okonkwo and the Haitian artist Franck Louissaint. Smith also championed the careers of Chicago Artists Allen Stringfellow and George Carter. In 1988, Smith began working with the Haitian artist Fritz Millevoix who had just moved to the United States. She helped bring his brilliantly colorful and dreamlike paintings of villages to prominence. In 2005, she curated an exhibit of Fritz Millevoix paintings at the Daley Civic Center in cooperation with Chicago’s Department of Cultural Affairs. In 2010, after the Haiti earthquake, Smith organized a fundraiser at the Nicole Gallery to benefit displaced artists who were affiliated with the Centre d’Art and also to rebuild the center itself. Also in 2010, the Nicole Gallery featured the work of Afro-Carribean influence artists Alexandra Barbot and the microscopic sculptor Willard Wignan. The Nicole Gallery closed in 2011 after celebrating its twenty-fifth anniversary.

Throughout her career, Smith has been celebrated for her dedication to Haitian, African and African American art. In 2002, she was featured on the cover of Chicago Gallery News. Smith was honored by the Chicago Alumnae Chapter of Delta Sigma Theta Sorority in 2009 and in 2010, she was named a Chicago Defender Woman of Excellence. Nicole Smith lives in Chicago, Illinois.

Nicole Smith was interviewed by The HistoryMakers on March 2, 2012.

See how Nicole Smith is related to other HistoryMakers
Click Here To Explore The Archive Today!