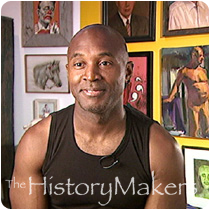 See how Nick Cave is related to other HistoryMakers

Art professor and performance artist Nick Cave was born February 4, 1959 in Fulton, Missouri. His mother, Sharon, raised him and his seven brothers. As a student at George Washington Carver School in Fulton, Missouri and at West Junior High School in Columbia, Missouri, Cave showed creativity and artistic ability at a young age. Graduating from Hickman High School in 1977, he enrolled in the Kansas City Art Institute where he continued to express himself through both visual art and performance art. In 1979, Cave met Alvin Ailey and spent that summer and several summers thereafter in New York, New York studying with the Alvin Ailey American Dance Theatre. After graduating from the Kansas City Art Institute in 1981, he designed displays for the department store, Macy’s, and worked professionally as a fashion designer, while continuing his passions as an artist and dancer. Cave earned his M.F.A. degree from Cranbrook Academy of Art in Bloomfield Hills, Michigan in 1988.

Joining the faculty of the Art Institute of Chicago in Chicago, Illinois, after his graduation from Cranbrook, Cave has built a reputation as an educator and performance artist, especially with his ritualistic costumes called “Soundsuits.” These sculpted, full body “soundsuits” are layered and textured in metal, plastic, fabric, hair, and objects designed to rattle and resonate in concert with the movement of the wearer, usually Cave himself. The suits represent Cave’s feelings about the isolation and insulation attendant to being a African American man in America. One of Cave’s well-known projects is Drop: Soundsuits in Degrees of Observation, a performance parade featuring ten dancers and sixty “Soundsuits.” In 2007, he planned an event in Chicago involving three dance companies, musicians and over 120 sculptured suits.

As the director of the graduate fashion program at the Art Institute of Chicago, Cave enjoys working with students and sharing his knowledge and experiences. His works of art have been shown at the Los Angeles Art Show in Los Angeles, California and the Seattle Art Museum in Seattle, Washington. Exhibitions of his assemblage sculptures in The Arts Connexion in Amsterdam, Holland, and Kestener Museum in Hannover, Germany have earned Cave an international following.

Nick Cave was interviewed by The HistoryMakers on July 22, 2004.

See how Nick Cave is related to other HistoryMakers
Click Here To Explore The Archive Today!